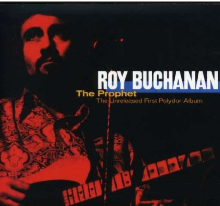 Roy Buchanan was an enormously skilled guitarist who made his name primarily as a blues musician. The Prophet, however, reveals Buchanan as capable of playing across a wide range of styles, with gut-wrenching intensity and emotion. The sessions for Buchanan’s first album took place in late 1969. Charlie Daniels (yes, the “Devil Went Down To Georgia” Daniels) secured a recording contract for Buchanan with Polydor, and he plays and sings here on many tunes (several of which he wrote). If you think Daniels is all redneck boogie, just give this CD a listen. The Charlie Daniels of the late 1960s wrote music with psychedelic, heavy blues and countrified-rock stylings.

Buchanan’s ability to hold back and play just what the song requires (a la Jeff Beck) makes the notes he does play even more worth hearing. The brooding “Black Autumn” is countered with the organ-driven soul of “There’ll Always Be,” while the playful “Humbug Down On The River” is an early slab of country-rock. Buchanan’s take on Bob Dylan‘s “Sign On The Window” is tasteful, with a flowing guitar bit accentuating the melody. The cover of Leonard Cohen‘s “The Story Of Isaac” is haunting and stunning. Moody acoustic chords follow Daniels’ gruff vocal through the opening verses before Buchanan tears off into the stratosphere with a smoldering guitar line.

Elsewhere, Buchanan puts his blistering brand on T-Bone Walker‘s classic blues “Stormy Monday.” Buchanan’s “About Face” segues into “The Messiah Will Come Again,” the instrumental that would become the guitarist’s signature tune. The flowing blues number builds in drama until Buchanan lets loose with a scattershot flurry of notes that fly like steel pellets from his Fender Telecaster. All heads down!

The liner notes call Buchanan “the best kept secret in Washington, D.C.” Is his music a secret to you?