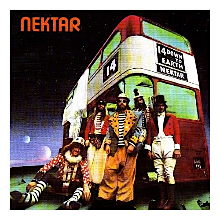 For many progressive rock fans, the German band Nektar hit their grand slam with the 1973 concept album Remember The Future – essentially one song spread across two album sides. The band’s 1974 follow-up, Down To Earth, takes a wacked-out circus as its theme; Nektar tighten the song structures and create another prog-rock classic.

The vintage Nektar sound is all over: chiming guitar chords (“Show Me The Way”), lilting harmonies (“Early Morning Clown”), perfect melodies (“Little Boy”), in-your-face-bass (“Astral Man”) and a wonderful sense of play (“Nelly The Elephant” and “Fidgety Queen”). Look for the Eclectic Discs reissue, which includes six alternate versions of Down To Earth songs and outtakes.

In the liner notes, Nektar guitarist and lead vocalist Roye Albrighton writes, “Down To Earth is Nektar’s Magical Mystery Tour…”

What other Magical Mystery Tours are there?

One thought on “Nektar – Down To Earth”