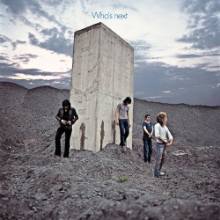 25 Great Moments in Rock Drumming – Day 17: Keith Moon, “Won’t Get Fooled Again,” from Who’s Next by The Who

Keith Moon’s drumming is best described as “barely controlled mania.” Moon is probably the most democratic of drummers, playing all over the kit as if afraid to leave any drum or cymbal out. “Won’t Get Fooled Again” is Moon at his best, playing like a storm, full of thunder and lightning.