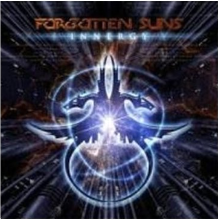 Portugal’s Forgotten Suns, after a game of musical chairs to determine their current line-up, have returned to fans of inventive prog-metal with their third release, Innergy.  The record’s loose concept deals with questions of the definition of “life” – whether that relates to the actual physical state of living versus dying, or as it relates to the quality of life.  The lyrics are written by band leader/guitarist Ricardo Falcao and sung by new vocalist Nio. Falcao’s main musical foil, keyboardist Miguel Valadares, returns to the fold and they’re joined by the spectacular rhythm section of drummer J.C. Samora and bassist Nuno Correla.  Despite the chaotic journey the band experienced prior to its release, Innergy is easily one of the best recordings the prog-metal scene has heard in recent years.

Opening with the sounds of an emergency room and an attendant yelling “Clear!” as he tries to revive a patient, “Flashback” centers on the thoughts of this patient as he fights to return the world of the living.  Nio’s voice at times conjures both Mike Patton and Incubus’ Brandon Boyd with clear strains of power and soul.  Falcao’s lead line is crushing and precise as he moves to convey the struggle within the mind of the song’s protagonist.  The EKG sound effect at the close of “Flashback” moves from flatline to the persistent beep indicating our hero’s victory.  The complexities of the rhythm throughout the piece likewise signal to the listener that this band has indeed overcome its own demons and are about to deliver a collection indicative of their own resurrection.

While they’re on a roll, the band charges straight into “Racing the Hours,” an examination of the passage of time as the song’s subject questions the listener about the merits of action over complacency.  Valadares steps to the fore during a solo atop lightning bursts from Samora and Correla.  His keyboarding is incredible as is the sound of his synthesizer – like an aggressive Don Airey, both classic and dazzling at once.  The 10-minute opus “News,” follows with more amazing performances from the group including funk-slapping breaks from Correla and atmospheric sections from Valadares.  Falcao’s lyrics this time follow the hero as he first attempts to escape from hearing the depressing daily news and then is overcome with the realization that rampant natural destruction is consuming Europe and America’s Pacific coast.  Falcao and Valadares play off of one another until at times we’re unable to distinguish guitar from synthesizer.

The idea that there might be one consistent concept running through Innergy is called into question with the tune “Doppelganger.”  At just more than 4 minutes in length, it’s the shortest song on the CD and seems to be designed for release as a single.  The lyrics refer to a menacing double of the hero that lurks just out of view, feasting on human despair.  The song is consistent with the rest of the music on Innergy save for the catchy repeated word “doppelganger” and the four dark tones accompanying it.  Valadares’ solo and textures are once again brilliant.

The 7-minute “An Outer Body Experience” is pure, creepy sci-fi about a man who’s figured out how to escape from a near-death state and enter into a reality where the parameters can only be speculated on by others.  While investigators try to understand what’s happened to the subject, he is driven somewhat mad by the power of his visions and eventually moves to a place beyond heaven and hell, peace and war.  Every member of the group is given room to stretch out and Falcao capitalizes on that by delivering one of his best, demented solos.

With their professed love of Rush, Dream Theater and Marillion, Forgotten Suns are in the mindset to create music that stands alongside that of their favorite groups.  Unlike most other combos with similar inclinations, this band is most capable of delivering music with its own identity that doesn’t merely borrow from what has gone before.  Falcao and company will hopefully soldier on in this incarnation and we can expect more sci-fi short stories from a band with talents well beyond their years spent in the music business.