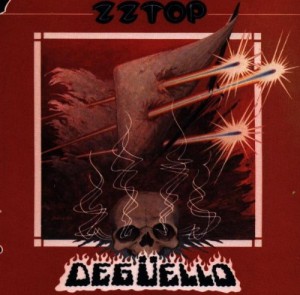 Happy New Year, music fans!  I’m not sure what’s finding its way on to your playback devices in early 2014, but I’ve been continuing to fill obvious holes in my collection by acquiring some classics that, for some reason, I hadn’t picked up previously.  Today’s column visits a band that’s had a rather messed up handling of their back catalog in the CD format, ZZ Top.  I, like many others, was happy to purchase the band’s Six Pack collection when it was released many years ago, thinking it was a great way to quickly catch up on the band’s output, but not realizing that so much of the music had been remixed for a more modern drum sound and essentially ruined in the process.  Inexplicably, but thankfully, the Six Pack did not include an album that was originally released during the same period as the rest of these early recordings, 1979’s Degüello.  That album did see a release separate from the Six Pack and included a mix that remained largely unscathed.  I’d recently picked up Degüello on CD and had a flashback to times spent decades earlier in the “booth” of a high school “radio station” with a good friend, Tim O’D, who knew this album back and forth and was happy to play it for the lingerers in our South Commons after school.  Degüello remains a magical stew of thick blues, extra-planar comedy, filthy innuendo, and grooves as irresistible as Texas barbecue.  Just what the hell did this trio include in the recipe to make it that damn good?

For starters, Degüello comes loaded with a total of three classic rock radio hits: their cover of the Sam and Dave oldie, “I Thank You,” the celebration of bluesman culture, “I’m Bad, I’m Nationwide,” and the paranoid boogie of “Cheap Sunglasses.”  Readers of this column should well be familiar with these gems, but the record on which they’re included may not have stood the test if time of the rest of the material didn’t hold up in comparison.  While “I Thank You,” with Dusty Hill’s new wave-friendly, slowly bobbing bass line, glossy overlay of guitar chords, and spiky, electric fills from front man, Billy Gibbons, proves to be a successful reinvention of the band’s sound while staying true to their roots, the moments where the band dips back to those roots while displaying their accomplished expertise are frequent across the album’s ten tracks.

A track that might go unnoticed if not for its tantalizing title, “A Fool For Your Stockings,” is another in a long list of ZZ Top’s hazy, sunset-beyond-the-mesa blues numbers paying homage to Buddy Guy (to these ears, anyway) with effortless, loving devotion.  Women tend to beguile Billy Gibbons, it seems, and the object of this song’s lyrics has him hopelessly in love, or what passes for it on the seedy side of Houston.  Shift gears to the weirdest song in the entire ZZ Top repertoire, “Manic Mechanic,” which sounds more like something coming out a studio gestation while hanging out with Devo.  Frank Beard drums his way out of a cage made from cowbells and wood blocks while the voice of a drag race competitor (presumably Gibbons aping a tire-iron-swinging gorilla) talks smack to his challengers.  No singing here, kids, but “Mechanic” will leave you both bewildered and smiling.  This was a favorite of the aforementioned Tim O’D, and his mouthing of Gibbons’ daffy bravado (lips puffed out, voice down low – “You want to race?”) is an unforgettable moment of hilarity from my teen years.

It doesn’t get more traditional than the Robert Johnson-penned, Elmore James-popularized, “Dust My Broom,” and our tres hombres are ever-eager to nod to their influences.  Gibbons sounds as if he was born singing and strumming the song, but age has added extra gravel to his pipes and taught him the value of a deftly-wielded slide bar.  And the tones, the tones…  The true magic of the band is found right here on this cut, with guitar effects that have been carefully chosen over time to provide that perfect blend of grit, sting, and warmth.  Following suit, “Lowdown In The Street” could have easily found its way on to one of the band’s earlier records, as it relies on a familiar, funky-bluesy shuffle that so many have now identified as a signature sound.

CDs will never match the clarity and warmth present on high-quality vinyl versions of classic recordings.  But, for many of us, CDs are the devil we must deal with when faced with budget and space limitations.  Buyer beware when snatching up ZZ Top’s tunes in hard copy digital, as the band and its fans have been dealt a great injustice by ignorant record label executives.  While you’re waiting for past mistakes to be corrected, you can trust that Degüello remains relatively similar to the vinyl version – enough that you can still appreciate all the little nuances that made it nearly perfect in the first place.