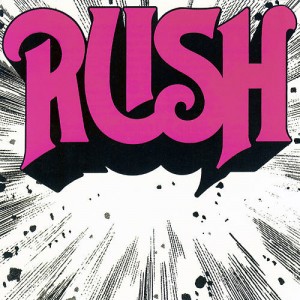 As mentioned in a previous column, I’ve planned to fill some glaring holes in my collection in 2014, focusing on some undoubted classics.  One such album is the debut from Canadian legends Rush.  I’d somehow navigated through my high school, college and early adult life without owning this prize, largely because I’ve had several friends who’ve owned the album, and it was never absent from someone’s turntable for too very long.  The record’s rock radio staples, “What You’re Doing,” “In The Mood” and the permanent fixture to every major market’s Friday afternoon “quitting time classics,” “Working Man” are more evident now than when I’d first discovered the band 30 years ago.

Rush’s debut record is sometimes looked upon with disfavor by Rush purists, as it marks the only time that longtime drummer and lyricist, Neil Peart, did not hold down the percussionist slot.  Original drummer John Rutsey lasted with the band through the release of the debut and up until about two weeks before setting out on tour to support Uriah Heep and Manfred Mann.  So for many, the very early stages of the band’s development include elements that would not be counted amongst those contributing to the band’s forthcoming fame.

With that being said, Rutsey was, by all accounts, an excellent drummer, though not possessed of the polyrhythmic prowess of his replacement.  And through mid-1974, his contributions to the group’s formative sound were considerable.  The lockstep grooves of bassist Geddy Lee and guitarist Alex Lifeson would remain regardless of the person sitting behind them on the riser, however.  Their friendship, more a brotherhood, is the backbone supporting Rush’s signature sound.  That element is prominently on display, as are Lifeson’s stinging, layered guitar tracks and Lee’s throat-shredding vocals, long a problem for many fair-weather Rush fans.

At 21 years old, few musicians are possessed of the confidence with which Rush tears through their debut’s set.  But Lee and Lifeson (both just turning 60 last year) command a swagger that saw them likened to Led Zeppelin’s Plant and Page by a press unsure what to make of the Canadians.  But hearing the opening fade-in of “Finding My Way,” burst wide open by Lifeson’s power chords and Lee’s shriek, it’s evident that Rush was never really the Zep-clones they were made out to be.  To me, the influence comes more from Cream and the Jimi Hendrix Experience.  Adopting the “power trio” configuration, and regularly using the blues as a touchstone, Rush did not employ the wider dynamics, nor folky experimentation of Led Zeppelin.  They were more a mixture of their British blues revival heroes and a blue collar neighborhood bar band…but a really mind-blowing bar band.

Listening closely to “Finding My Way,” you can pick out some of the guitar ideas Lifeson would use on the band’s breakthrough, 2112.  The ideas were gestating, but not yet fully formed.  And without Peart involved to add his high-concept lyrics, the band muddled through ruminations on girls and relationships.  Aiming for that elusive radio hit, they also took stabs at pop-friendly lyrical concerns like friendship on “Take A Friend.”  Not much more than a choogling blues number, it’s elevated by some killer Lee harmony vocals and vocal effects (the echo on “so good!”).  But the trio bash it out as if it were a well-known standard.

But for me, like most fans of this album, the sparks fly on Side 2.  The brilliant riff behind “What You’re Doing” should be enough to have Rush inducted into the Rock and Roll Hall of Fame on its own.  God knows how many times Lee and Lifeson practiced their lines until perfection was achieved, but I reckon they could play the song in sync in their sleep nowadays.  And it was this over-the-top arena rock that would give them a connection to their first American fans.  The sassy “In The Mood,” with its guy-on-the-prowl lyrics and another unbelievable riff fits perfectly alongside “What You’re Doing.”  Memorable for Rutsey’s cowbell as much as for Lee’s cliché “hey now, baby”, it’s unlike anything else in the Rush catalog, and it’s celebrated for its silliness by both the band and its fans.

The band’s most Zep-like moment can also be found on side 2 in “Before And After.”  It’s there that we see an uncharacteristic dip in the volume levels on the song’s beginning, much as we might see on a quieter moment from Houses Of The Holy or Led Zeppelin III.  But this a song of contrasts, and it’s not long before the sturdy, rather funky, riffing gets cranking.  It’s not a tune that fans mention very often, but it’s definitely stood the test of time no worse than any of the album’s “hits.”

Closing the album is the song that made Cleveland take notice, “Working Man.”  It was probably a given that any tune playing to a market of factory workers which mentioned both a grueling work schedule and the reward of an ice cold beer at 5 o’clock would have no trouble connecting with fans across the border in the rust belt.  And so history was written and Rush began their ascent to an unusual arm’s length fame that they enjoy to this day, by first wooing radio listeners, then embarking on punishing tour schedules.  What I find odd, though, is that the underlying message of “Working Man” seems to be ignored by most listeners.  It’s not a celebration of the nine to five, but a condemnation.  The audience is challenged to check if they might be living their lives a lot differently, framing their lifestyle as empty and repetitive.  Ah, but we’re easily distracted by frothy malt beverage and guitar solos that make our ears bleed!

Rush is not an album that adds much to the group’s mythology.  The symbolism, in-jokes, and recurring concepts surrounding their work hadn’t yet been formed.  There’s no mention of a “Xanadu,” “Fear Trilogy” or “Solar Federation” to be found.  It really fits in much better with the party rock records and early ‘70s hard rock by Aerosmith and KISS in your collection than it does with sweeping prog masterpieces like Genesis‘ Foxtrot or King Crimson‘s Lark’s Tongue In Aspic.  And while it’s not usually remembered as one of the best Rush albums, it’s still a rock classic, not meant to be absent from a serious collector’s stack for decades, as in my case.  So, I’ve repented and bought the Mercury remastered CD version.  What’s your excuse?