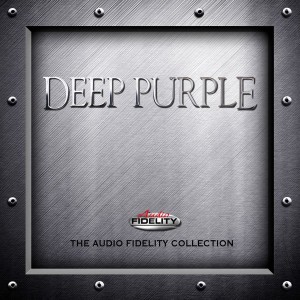 From 1970-73, the Deep Purple “Mark II” lineup of Ian Gillan, Ritchie Blackmore, Roger Glover, Jon Lord and Ian Paice released four albums that set a new standard for heavy rock/metal: In Rock, Fireball, Machine Head and Who Do We Think We Are. And it was from these releases that the band garnered the most popular acclaim and success. Several radio hits emerged including “Highway Star,” “Woman From Tokyo” and the riff-driven anthem “Smoke On The Water.”  But dig a little deeper (pun intended) into these recordings beyond the FM standards and you’ll find nuggets galore. In this case, the nuggets are 24K Gold.

That’s because Audio Fidelity has re-reissued the quartet of classics in a limited edition, numbered, 4-CD box set of 24K Gold discs titled Deep Purple – The Audio Fidelity Collection 1970-1973. I say “re-reissued” because Audio Fidelity first released these discs individually in limited editions several years ago. They quickly sold out, and those who didn’t strike early were forced to pay big money in the secondary market for what became very collectible releases. With remastering courtesy of Steve Hoffman, the sound is digital done right – the discs are sourced from the master tapes and restored as faithfully as possible to retain an analog quality in a digital medium. The sound across all four recordings is full, open and consistently excellent. The discs are also HDCD-encoded, so you can take advantage of that Microsoft technology should you have a HDCD-capable player. Otherwise, they are compatible with any CD/DVD player.

In Rock blew the doors open for the band, unleashing a torrent of blistering sound with the lead-off track “Speed King.” It opens with a burst of band noise and feedback and then glides into a gentle, hymn-like organ bit from Lord that tails off into silence before the hammer drops. Guitar, bass, drums and organ pound out power chords, as Gillan belts out a ferocious update on Little Richard and hits from the past. The seat belts stay locked tight with “Bludsucker,” a chugging full-speed rocker that just kicks ass. The hypnotic “Child In Time” became a concert favorite, and it’s easy to see why as even the studio recording has a burning intensity, thanks to a remarkable performance by Gillan. His voice had awesome, often frightening power in the early 70s and you can be serenaded all over again.

Of these four albums, Machine Head has received the lion’s share of fame, but the follow-up to In Rock, 1971’s Fireball, is the superior record. Every facet of the band is on display here: heavy rock, country-rock (!), blues, psychedelic and humor. Listen to “No One Came” for a hilarious look at life through the eyes of a wannabe rock star. As I listened to this collection, it struck me how “bluesy” and “drumsy” these tunes are. The Purple sound may be heavy on guitar and organ, but the glue that holds it together is Paice’s incredible drumming. And his drums sound great here. Listen to the explosive opening of “Fireball,” as Paice flies across his kit in a Buddy Rich-like flurry. In fact, Purple classics including “Fireball,” “Smoke On The Water,” “Woman From Tokyo” all begin not with a guitar riff or blasts from Lord’s organ, but drums alone.

Fireball’s “Strange Kind Of Woman” and Machine Head’s “Lazy” show how the Blues can be supercharged into something completely fresh, riding high on some killer Blackmore riffs.  “The Mule” is another personal Fireball favorite, awash with psychedelic chording and Paice’s hypnotic drum pattern.

Not much has to be said about Machine Head, as several of these tracks have become permanently burned into the ears and minds of generations of rock fans. But I will mention that Blackmore’s guitar solo on “Highway Star” was hugely influential to an upcoming generation of guitar shredders such as Yngwie Malmsteen, who locked into Blackmore’s Fender Stratocaster sound and approach. It’s one of the greatest solos of all time. And I’ve always thought “Never Before” was a sleeper track.

Likewise, Who Do We Think We Are is a much underappreciated effort. If you haven’t listened to the entire recording, or just shut things down after the lead-off track, “My Woman From Tokyo,” it’s been your loss. The album is brimming with grooves and attitude. The roundhouse riffs that power “Super Trouper” and “Rat Rat Blue” are something at which the Mark II lineup excelled. And the deft interplay between Blackmore and Lord is truly special.

A side note: Where I live in northern Wisconsin, we’ve seen a lot of snow already this winter and the local roads I travel are very rough. During a recent daytrip, I took a handful of Redbook CDs with me and listened to them throughout my travels. One of the discs I tried to play in my vehicle kept skipping and hanging up every time I hit a bump in the road. I became frustrated and reloaded the disc player with the Audio Fidelity In Rock CD. To my surprise, the disc played with no hiccups or hang-ups even when I traveled over bumpy patches. The same was true of the other three Purple 24K CDs.

Conclusion? This is not only a set of great-sounding discs, but also very stable and highly readable under trying conditions. These are landmark recordings that Deep Purple fans will enjoy for years to come. If you missed them the first time around, here’s your chance.