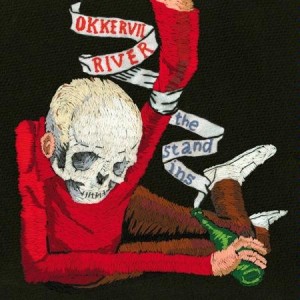 Fans of classic psychedelic rock may have recently encountered an outstanding indie rock band based in Austin, Texas through their association with legendary singer Roky Erickson.  His 2010 “comeback” album, True Love Cast Out All Evil, was produced by Okkervil River frontman Will Sheff, and featured the balance of the band as musical support.  That release should have been a clue to the old school rockers amongst you that Okkervil River has something very unique and incredible going on in their own recording career.  With seven full length releases and a smattering of EPs behind them, Okkervil River transcends the typical trappings of so-called “indie bands” with stellar lyrics and cleverly constructed arrangements.  Let’s step back to take a listen to their fifth album, 2008’s The Stand Ins.

Released on the ever-interesting Jagjaguwar label, The Stand Ins had originally been conceived as the second half of a double album which saw the first half appear on the previous year’s The Stage Names.  For whatever reason, the double album idea was scrapped, but not at the expense of the material or the thematic concept found on both albums.  The rough storyline follows a variety of characters as they encounter the highs and lows of fame.  Most of the touch points come from experiences in the music business, but film stars are also discussed (Sheff’s time as a film student surely coming into play here).  While The Stand Ins serves as an enjoyable sequel to The Stage Names, the enjoyment of either is not dependent on ownership of both.

“The Stand Ins” is also the name of three musical interludes scattered across the album, each coming in at less than a minute long.  These pieces are instrumental and consist of mainly strings and synthesizers.  They serve as a sort of “palate cleanser” before dipping into tasty, toe-tapping dramas.  This is exactly what happens at the album’s beginning as “The Stand Ins, One” glides smoothly into the upbeat “Lost Coastlines.”  Sheff duets with soon-to-be-former bandmate Jonathan Meiburg in an allegorical tale seemingly about an army setting sail to conquer a foreign land, but actually (without aid of a crystal ball) about how touring can tear a group apart.  Their honeyed croon serves as a conversation between two men on board the departing vessel.  It’s this sort of multi-dimensional songcraft that characterizes Sheff’s work and really commands our attention on The Stand Ins.

The shuffle-step analysis continues on “Singer Songwriter,” where Sheff matter-of-factly dismisses the work of an artist who was born to privilege and subsequently reserved his good taste for all but the music he’s made.  There are enough details included in the lyrics (“Your great grandfather was a great lawyer, and his kid made a fortune off the war.  Your father shot stills, and then directed films that your mom did publicity for.”) that we could probably research the identity of the song’s subject, if we thought it important.  Or if he actually exists.  But it’s details like these that make Sheff’s music feel more like short stories than songs, and they’re also what compel us to push on through the rest of the record.

“On Tour With Zykos” presents several more stand-out moments of whip-smart lyrics and gorgeous accompaniment.  The story here is told from the point of view of a woman whose devotion to a famous rocker has left her frustrated and lonely.  Amidst beautiful piano lines and Sheff’s reaching to the higher end of his vocal range, the world of the woman whose man places his craft above all else is vividly displayed.  Her boredom and unease are tied tightly to the love of a man who’s placed her on a back burner.

The term,”indie rock” really means nothing beyond the fact that a band has not recorded for a “major” label.  Lazy journalists and folks who can’t help but categorize artists despite their vast differences are the ones responsible for imparting the idea that only the younger music fan would appreciate an “indie rock” band’s work.  Okkervil River busts that notion wide open with one of the more adult and thought-provoking releases ever issued by a band that hadn’t yet been snatched up by a lumbering, corporate behemoth.  I can’t recommend The Stand Ins and The Stage Hands enough for those of you that are tired of gimmicks and juvenilia.  Without a shred of punk or heaviness to be found in their music, Okkervil River’s albums will fit nicely alongside the albums by The Byrds, Scott Walker, and Wilco that you already have in your collection.