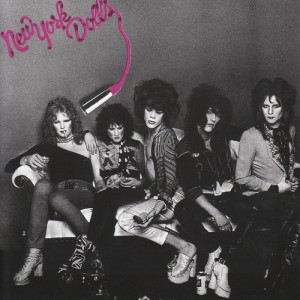 As far as the New York Dolls were concerned, they were just playing rock and roll.  There was no other name for what they did…yet.  In 1973, there was no movement of which they were a part and certainly little critical recognition of this diamond in the dustbin.  But the dreams of vocalist David Johansen and rhythm guitarist Sylvain Sylvain could not be restrained.  The world is a better place for this, because sloppier, cruder, heavier, faster brilliance had been ignited in the talents of countless kids who did hear this band and understood that there were far fewer limitations to their own artistry than they’d first realized.  To go forward, it’s sometimes necessary to take some steps backward first.  This is the truth.  This is the New York Dolls.  This is the birth of punk.

An abrasive quintet, the original Dolls only managed to squeeze out two albums before infighting, substance abuse, and questionable management decisions sunk the ship, seemingly for good.  But those two records, especially their self-titled debut, were amazing exhibitions of raw mood and cross-dresser sweetness.  I could write paragraphs on the multitude of guitarists that aped and outright stole the original schtick of lead guitarist Johnny Thunders.  His approach, infinitely fearless, was not limited to merely his playing, but also to his general attitude toward life.  Nonconformity and danger fairly well seeped from his pores.  Backed by the shaky rhythm section of bassist Arthur “Killer” Kane and drummer Jerry Nolan, the combo threatened disintegration at any moment.  Add producer/wunderkind Todd Rundgren to the party, with his own success as a solo artist already established, and his keen ear for pop hooks and emerging dementia struggled to pick the proper sounds for displaying what the Dolls had to offer.  Famously claiming to have never touched the record, having to fight his way through five musicians who were all sure they knew how the mix ought to sound, he managed to lay down some Moog and piano tracks to plaster over some of the holes in the group’s stumbling onslaught.

Sounds pretty sketchy and scary so far, eh?  Well, it absolutely was!  Although listening to the album 40 years on, it’s relatively tame.  That’s only because there’s been four decades of bands trying to one-up the Dolls.  When we listen with our 1973-ears, ensconced in the era of the varnished wizardry of prog rock giants, ELP and Yes, or the rising Laurel Canyon singer-songwriter clan, we can tell just how alien this music sounded way back when.  The Dolls knew one thing to be true and that was that the kids wanted to rock out.  Who could have fun nodding off to the umpteenth synthesizer solo, or commiserating while their tears rolled down into their cups of herbal tea?  Radio programmers didn’t know what to do with them.  Marketing staffers couldn’t figure out how to pigeon-hole them.  Album sales sucked.

So, what’s the draw?  Why has this unassuming record held such a firm position in music fans’ hearts for all these years?  With the Stones-y boogie and the Iggy-infused screeches of Johansen, “Personality Crisis” tears our heads off before we even know what hit us.  A tale of confused sexuality and questing identity, the song blended good ol’ 1950’s rock with the minds of maniacs.  Teenagers could identify.  Still, Johansen sounds as if he’s going to seriously lose his shit and possibly take the whole of the audience’s front row with him…seats and all!  Thunders’ lead fills, along with the band’s gang chorus, makes the whole affair sound as if the best party ever is occurring right now.  We’d better hurry on in before we miss out on some action!

“When I say I’m in love, you’d best believe I’m in love.   L-U-V.”  Johansen’s “Looking For A Kiss” while adopting a Mick Jagger swagger with 10 times the attitude of the Glimmer Twin.  Well, he smooches the hell out of his arm, or some other body part, at the song’s end, but the band staggers across a landmine of sludgy rave-up before he gets to make out with himself.  These first two songs, sequenced back to back, lay down the formula for the majority of Dolls tunes and totally set things off.  If you’re not sticking with them thus far, you’d bailed after the first few chords of “Personality Crisis.”  If you’re here, you’re hooked.

Side 1 closes with the lengthier “Frankenstein,” co-written by Johansen and Sylvain, as opposed to the Johansen/Thunders credits appearing on most of the rest of the record’s contents.  Johansen struggles more than usual to stay in key while warning us about the notorious doctor, or possibly his namesake monster.  I don’t really know what Frankenstein symbolizes, but I could guess that they’re referring to the band itself, or possibly one of its members.  We’re constantly asked if people would expect Frankenstein, or if we could make it with Frankenstein.  I can’t imagine anyone actually wrote these lyrics out verbatim and recited them as poetry.  Pffft!!  Johansen’s freestyling, making it much harder to know if there was a proper subject for these words in the first place.

Side 2 begins with more standard, and excellent, Dolls fare and another one-two punch in “Trash” and “Bad Girl.”  Both songs are huge showcases for the monster riffs wielded by Thunders.  “Trash” (as co-written by Johansen and Sylvain) is the name of Johansen’s love interest, and if you thought the guys in the band were unpredictable and dangerous, “Trash” is even worse.  Johansen debates whether he really likes her as she’s waving a knife around.  Eventually he relents, admitting that she’s the one.  We wait to read the story of their impending murder-suicide in the morning papers, ‘cause we know this isn’t going to end well.  Thunders, meanwhile, rolls out a guitar line that would make Buddy Holly jealous, if there weren’t so much high-end string bending.  You have never heard such a glorious collage of twang and fuzz.  “Bad Girl” follows with a sleazy saga of carnal lust.  Thunders again intentionally savages his guitar as a soundtrack to the single-minded pursuit of a less than chaste woman.

“Subway Train” is a demented ditty about a trip to nowhere special aboard New York’s underground conveyance.  The off-key vocals on the chorus oddly make this trip well worthwhile.  We then detour through a reading of Bo Diddley’s “Pills”, where Johansen unleashes some incredible harmonica.  After visiting Johansen and Kane’s “Private World”, the whole thing collapses into ”Jet Boy.”  Simultaneously perplexing and telling, Jet Boy morphs from the guy flying high around the city after stealing Johansen’s baby into Johansen’s baby her- (him-?) self.  This is a tough song with a goofy doo-wop/girl group background vocal on occasion.  Once the song is set up, Thunders busts loose with amazing, melodic soloing and near surf guitar neck slides.  We’re back and forth between Thunders on fire and the band sounding like they’re planning to set something on fire.  Handclaps, muscular string-busting, and Johansen shouting along to another gang chorus, this one had just about all the elements of the archetypical Dolls song.  A perfect closure on this chapter.

OK, so I was six years old when this record came out.  I didn’t start digging on punk rock until about twelve years later, long after the Dolls’ initial demise and well before I’d learned to identify what made this music so special.  I’ve managed to wrangle a 2008 vinyl reissue of New York Dolls on Vinyl Lovers Records, a European release.  There’s something invigorating about hearing this music on vinyl.  If you’ve beat your copy up, you might even enjoy the cracks and pops as decoration to the junkie-transvestite-scumbag planet described therein.  But however you prefer to hear this album, enjoyment will be the assured payoff.  Inspiration can be found in the weirdest of places and I’ll be damned if The Dolls didn’t find theirs amid the slimiest neighborhoods of The Big Apple.  The aforementioned Mr. Jagger once cautioned us: “Don’t bite the maggots.”  Hell, Mick, The New York Dolls put those larvae on their breakfast cereal!  Not only that, but the Dolls presented audiences with a truer picture of New York, music, and life itself, than anybody before or since.  The Stones may be legendary, but The Dolls were deities.