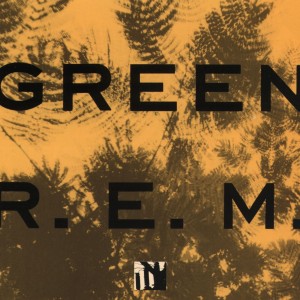 Yes, you read that right.  It’s been 25 years since R. E. M. released their first collection under contract with Warner Brothers Records after a steady creep toward mainstream acceptance on the respectable indie label IRS Records.  If you were a fan of the band in the ‘80s, seeing your heroes move away from an accepted font of “college rock” (which is the first term I’d ever heard used for what would eventually be known as “alternative rock”) toward a gigantic media conglomerate made you feel a bit uneasy.  And trust me, there were a lot of people that supported the band during their early years that expected them to keep the same sound to their music, well, forever.  R. E. M., being actual artists and not just hack musicians, had their sights set on mixing things up to incorporate more elements of pop music.  You could see that trend going as far back as “Radio Free Europe,” and certainly “Fall On Me” and “The One I Love,” even “Can’t Get There From Here,” were straight-up pop songs told via singer-guitarist-bassist-drummer rock band instrumentation.  Yet those fans that chose to ignore that side of the band’s sound were likely quite shocked by the more overt stabs at pop found on Green.  Some cried “sellout!”, but they really didn’t get what was going on.  Green is an incredible album, and the quarter-century reissue package certainly feels like a celebration of that fact.  Let’s check it out!

Within the “clamshell” box, sort of a one-piece, flip-top thing in the dimensions of a CD jewel case (but, as my old buddy Dave might say, “With girth”), of the CD version from Rhino Records are one disc devoted solely to the 11-song album (says there’s only 10 on the sleeve; stick around for the secret hidden bonus track), a second disc capturing the performance from a gig at the end of the Green tour in Greensboro, North Carolina, a spiffy booklet expanded to include liner notes from Uncut Magazine’s inimitable Allan Jones (for my money, this is the best music magazine in publication currently and perhaps ever produced;  free plug, Allan), four square postcard-type dealies featuring each band member in their favorite rock star pose, and a gigantic fold-out poster featuring all four band members shaded in the same green and orange color scheme used for the album’s cover art.  The meat here, aside from the original album itself, is found on the live disc.  While parts of this show are also featured in the live DVD Tourfilm, this CD includes four songs not found on the DVD.  And while I’m a bit old school when it comes to my music formats, you may be tempted to purchase this package as a digital download in order to get another five songs not found on the CD.

Green, R. E.  M.’s sixth studio album, received a lot of exposure due to the four singles released from within.  “Orange Crush,” “Stand,” “Pop Song ‘89” and “Get Up” all enjoyed various degrees of singles chart ranking.  These tunes bring the sheen that truly set this record apart from what had come before.  Producer Scott Litt, who actually shared his duties with the entire band, was perfectly in sync with what the quartet was trying to achieve.  The remainder of the album, and even at points within the above-mentioned cuts, displays much of what we’d come to expect from R. E. M. – clever rock music indebted to The Soft Boys and The Velvet Underground, occasional acoustic-based interludes, and a mystifying and charismatic lead vocalist.  But there are three songs that especially stand out in this collection as my personal favorites.  They are, in no particular order of preference: “Pop Song ‘89,” the perfect choice for the record’s first track in its aural announcement of the band’s expansion of sound, seemingly seeking to provide an argument against expected criticism of this direction, and featuring splendid multi-tracking of Michael Stipe’s lead vocals alongside Peter Buck’s fuzzy, gravelly guitar, and backed by Bill Berry’s superior drum work; “You Are Everything,” which began the tradition of the band swapping instruments in order to add more color to their palette.  Here Buck plays mandolin, bassist Mike Mills is on accordion, and drummer Berry picks up the bass guitar.  The acoustic setting shimmers behind Stipe’s quizzical lyrics and balances against the rock and commercial numbers rather well; and “I Remember California,” the album’s longest track at exactly five minutes, closes out the set (unless you count the hidden track) with a dark tone and some added sting to Buck’s guitars.  Mike Mills’ harmony vocals, always complimentary to Stipe’s, are blended with Stipe’s instead of the usual take of providing lines that stand apart from the lead: a haunting effect.  Stipe’s lyrics speak of a futuristic Pacific shore landscape now devoid of everything that once made the place special – even the ugly stuff like traffic jams are gone.  Was there an earthquake?  Some sort of industrial disaster?  We get the impression that we’ve fucked something up through neglect, but the specifics are left to the listener to determine.  Underneath it all, Berry is the consummate time-keeper, reminding us that he, all along, was the glue that held this organization together.

As much as I love Green, I’m far more excited by the live disc.  I was only lucky enough to see this band in concert one time, at East Troy, Wisconsin’s legendary Alpine Valley Music Theatre (on this tour and with NRBQ as the opening act!).  The live set brings back memories I’d thought were long lost.  I don’t know many people who had seen the band back in the IRS days, but a friend of mine who was still living in his native England at the time (Hi, Roy!) did see them before they exploded in popularity and he tells me the show was very memorable.  In fact, R. E. M.’s popularity in the U.S. was eclipsed by that found in the U.K., a trend which grew throughout the history of the band’s existence.  Yet the Green tour, so exhausting that it kept the band off the road for the next six years once they’d finished, was the largest tour mounted by the band over their career.  The music was positively explosive, blending early favorites with a healthy sampling of new songs.  It’s tough to pick only a few highpoints here as the set is consistently excellent.  But, I’ll give it a go.

“Good Advices”:  A deep cut from the album Fables Of The Reconstruction.  This is the sort of Byrds-ian jangle-pop that the band perfected in the mid-80s, and the group performs it as the favorite that it is (of both the band and the audience).  It’s a nice, mid-tempo number that drops in well between an even bigger favorite (“Exhuming Mc Carthy”) and a big hit (“Orange Crush”).  The band had, by now realized that you can’t just get on stage and blast out a set.  Peaks and valleys are the key, and their grasp of this demonstrates how professional they had become in just over half a decade of playing together.  In any case, this one produced a big smile when I heard it.

“These Days” – “World Leader Pretend” – “I Believe” – “Get Up” – “Life And How To Live It”: Go back and read those song titles again.  It almost seems as if a message is being sent subliminally to the crowd.  Stipe lays out not just a summation of the tension many of us felt during the latter days of the Cold War, but also a prescription for change, which, as Stipe had always correctly understood, starts from within and grows outward.  Stipe’s political activism, which grated against more conservative music listeners, was never a cudgel which he used to bludgeon those whose opinions differed from his own.  Rather, sometimes cryptically, his lyrics presented ruminations on the world around him in a matter of fact way.  He didn’t underestimate his audience’s ability to ponder these ideas and form their own opinions.  He formed a strong connection with fans by doing this and we appreciated that, for once, we were not being preached at nor were the messages “dumbed down” for the common denominator.  The band, augmented by the spectacularly underrated Peter Holsapple on guitar, keyboards, and sundry sounds, glides right through this subset from Berry’s first crack of the snare on Life’s Rich Pageant’s “These Days.”  Long time fans of the band will recognize this song as one of the most balls-out rockers the band had in their catalogue and their skills as musicians gel gorgeously.  Drifting into the piano-backed castigation of presidents, party bosses, and politicians that dangerously dangled apocalypse before us as a means to boost their careers, Stipe’s stance refuses to allow that any one person on this Earth has a greater right to security than anyone else.  His “hammer” sounds at the end of the song, following him singing “I raise a wall/I’m the only one/I will be the one to knock it down” provides interesting punctuation.  He then recites a verse from “I Believe”, without any musical accompaniment, as if to alert the audience to pay particular attention.  It’s another jangler from Pageant, that’s more a Gram Parsons Byrds song than one from the David Crosby era.  Mills’ ascending then descending bass line is rock solid, as are his background vocals.  A brief pause gives way to one of the heavier tunes from Green, which is also one of the album’s most commercial cuts.  The chord changes on “Get Up” are dazzling and Mills’ sprightly “get up” background lines, changing to an echo of Stipe’s lines on the chorus are wickedly wonderful.  They then revisit Fables for one of Buck’s more impressive ringing strummers to pick the pace up once more.  That they had so much amazing material at this juncture of their career should not be lost on even the most casual of fans.

“Begin The Begin”: This is perhaps my favorite showcase for Buck’s abilities, and in a live setting it’s even more alluring.  The rhythm section behind this Pageant selection is positively thunderous as Buck’s chiming riffs roll over the chord changes.  Every time he delivers his mini-arpeggio to begin a new verse, the listener feels a chill run up their spine in the knowing that they’re hearing what was one of the best rock bands to grace this planet with its presence.

It’s true that R. E. M. had more than a few missteps in their career before calling it a day, eventually, late in 2011.  And frankly, I’d sort of checked out when drummer Berry departed and was not replaced in 1997.  Ask any band, from U2 to ZZ Top to the Rolling Stones, how hard it is to sustain a career while retaining the principle core or the original line-up of their ensemble over decades.  People, even great friends and collaborators, can grow apart, as is human nature.  We’re all individuals with our own interests and abilities, and that’s especially true with musicians.  But don’t lament the passing of this wonderful group, dear readers.  Instead, we ought to celebrate everything they meant to us over the years.  R. E. M. literally changed people’s lives while they were together and for that, we should be forever grateful.