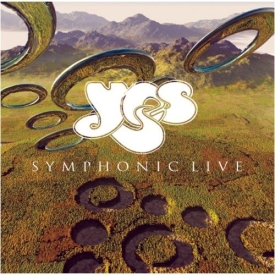 Being that Yes have long opened their shows with an excerpt from Russian composer Igor Stravinsky’s “Firebird Suite,” it makes sense, really, that eventually the band would “go symphonic.” In 2001, Yes – vocalist Jon Anderson, guitarist Steve Howe, bassist Chris Squire, drummer Alan White and guest keyboardist Tom Brislin – joined forces with the European Festival Orchestra, under the direction of Wilhelm Keitel, for a series of shows, and the November ticket in Amsterdam was filmed and recorded. A DVD was released, but only now has the performance been offered in a compact disc package. The double-disc Yes Symphonic Live is in many ways, the way to hear the band.

The keys to this recording’s success are twofold: First, Yes’ music stands up well to symphonic treatment – their multi-layered sound and instrumentation having far more affinity with Brahms and Ravel than Kiss or Metallica ever had or will. Second, the orchestra is used to accent the music, not overwhelm or reinvent it. That’s important, because other such efforts by other such concerns have often been little more than sleep-inducing affairs or ill-judged experiments. Bottom line, if you like Yes, you’ll like (if not love) this re-setting of many of the band’s classic works.

I mentioned that the orchestra is used tastefully and to the music’s advantage. A fine case is on “Close To The Edge,” where the use of brass adds a stately polish to the sort of mysterious fog that binds this tune together. The string accompaniment, on the “I Get Up, I Get Down” section, is a particularly lovely backdrop for the gentle vocal section, where Anderson, Howe and Squire harmonize together. “Long Distance Runaround” sounds glorious and spacious, here, with the band members laying back a bit on the beat as the other instruments add a sonic whomp.

The inclusion of three songs from 2004’s Magnification – a sorely overlooked gem in the Yes catalog – makes this record even better. The title track, along with “Don’t Go” and the gorgeous “In The Presence Of” should send you back to reassess or newly discover Magnification, an album that is in many ways Yes’ “Symphonic Studio.”

Meanwhile, hardcore prog-rock fans will delight in the side-long epics “The Gates Of Delirium” and “Ritual,” both performed in their entirety and given even greater scope under Keitel’s baton. “Gates” is perhaps the most atmospheric and complex song in the Yes catalog, and here it comes alive from the first shimmering note. The orchestral additions give the song incredible depth, whether it be a pronounced clash of cymbals or a judiciously meted sweep of pizzicato and brass – check out the song at the first “Listen” section, around the 6-minute mark. Beyond the orchestration, the backing Squire vocal is haunting and awesome. The wild instrumental midsection of the song, again, is heightened by the Festival Orchestra’s contributions, taking it down an even wilder road. The serene “Soon” section, which caps “Gates,” is bolstered with the angelic fluttering of harp and sway of violins. Beautiful.

To break up the sheer density of the arrangements, Howe is given solo spotlight to perform a section of Antonio Vivaldi’s “Guitar Concerto in D-major” and his nylon-string tour de force “Mood For A Day.” Both pieces work well in this context and provide a well-timed breather.

Up next is “Starship Trooper,” whose third part called “Wurm,” finds Brislin playing a cool keyboard lead, as Howe comps the rhythm. Then… Howe enters with the first notes of his legendary solo as the strings resonate around him. The tune ends with an almost dirge-like climax.

“Ritual” is probably my favorite Yes song ever, and I’m hard pressed to think of a better version than on Symphonic Live – and I’ve heard dozens. Squire’s bass work is absolutely riveting, full of melody and aggression. White, as well, absolutely hammers this song home, and Anderson’s voice sounds unchanged from 30 years back.

A couple other highlights include the tasty harmonica(!) on “And You And I” and the manic ending of “Owner Of A Lonely Heart.”

Yes Symphonic Live is a must-have for Yes fans. Even if you’ve heard “Starship Trooper” or “And You And I” a gazillion times, you’re sure to find something new to appreciate here.

Footnote: There is one curious error in the CD jacket – where Rick Wakeman is given a partial credit for writing “The Gates Of Delirium.” Any Yes fan knows Wakeman didn’t play on or write music for the Relayer album, from which “Gates” came.