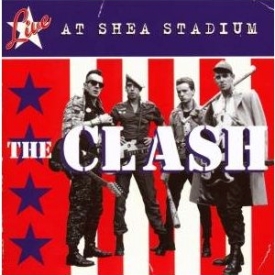 The Clash Live At Shea Stadium is truly an amazing document capturing The Clash on their second night opening for The Who at Shea Stadium on Oct. 13, 1982.

Producer Glyn Johns recorded the spectacle and it then sat in a box at late singer Joe Strummer’s place for more than 20 years.  God only knows what other tapes are stashed away in garage and warehouse graves around the world, but this one has been resurrected for us to appreciate.  Although it seems that Pete Townshend was the only one digging the punk superstars as they were booed from the stage night after night on this tour, the band soldiered on to a triumphant welcome before a sellout crowd of 50,000 in New York City.  The Clash was finally breaking into the American market thanks to the success of “Should I Stay Or Should I Go,” but they wouldn’t bust it wide open until months later when “Rock The Casbah” hit the Top 40.  All they had to prove on this night was that they were one of the best rock bands on the planet, and their supporters were there in droves.

The set pulled from throughout the band’s catalog and showcased U.K. hits and little-known tunes alike.  Strummer is in rare form, yelping and screaming to help build excitement.  Mick Jones’ guitar is particularly powerful and well-recorded, while his turns at the mic show him in fine voice.  Paul Simonon is the glue that holds it all together, and this release demonstrates how important he was to the might of The Clash.  Returning drummer Terry Chimes sounds like he’d never left the group.  Highlights include a brutal, attention-grabbing opener in “London Calling,” Jones leading the group on a version of Eddie Grant’s outstanding “Police On My Back,” and the muscular reggae chops on “Armagideon Time.”  The live arrangement of “Rock The Casbah” is especially enlightening as it dispenses with some of the studio trickery on the soon-to-be hit.  The closer, “I Fought The Law” sounds remarkably Who-like and shows that The Clash were really earning their pay prepping the crowd for the headliner.

Like most Americans, I came to appreciate The Clash after they had already faded from the spotlight.  But when we heard statements from fans and journalists like, “The Clash is the only punk band that really matters,” we’ve now got this excellent relic to show us just what the hell they were talking about.