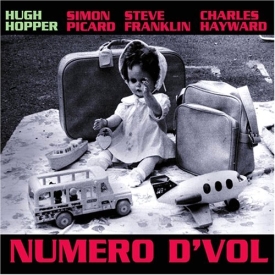 Hugh Hopper, best known for his four-year stint as the bassist who replaced Kevin Ayers in The Soft Machine back in 1969, has had his live and recorded output slowed due to a battle with leukemia.  That’s why listening to what he’d been cooking up in 2007 with his group, Numero D’Vol is so special.  The album features 11 tracks of free jazz with liberal doses of electronics and fuzzed-out bass scattered about.  Hopper’s leadership of the group is best employed through the delegation of authority.  He’s learned what it means to be a true musician and share the stage with your fellows following 40 years of on and off gigging.  Numero D’Vol is a bubbling-over of the souls of four dudes having a blast with each other — as it should be.

Each piece on Numero D’Vol is a study in collaborative invention.  Take “Straight Away” for example.  Hopper burbles alongside the gliss of keyboardist Steve Franklin’s ambience before sax player Simon Picard dives in for a vicious attack.  This is all that’s meant to be said with the song and it never forms into something with a traditional structure, finishing six and a half minutes later as if one door has been closed before an uncompleted walk down a long corridor.  The disc’s opener and title track starts off calmly with Charles Hayward’s bass drum marking time while Franklin and Picard alternate between darkening gloom and filtered light.  Once Hopper joins the mix, Picard rolls off into a slow, sad series of phrases, building in speed but never altering emotion — more lamentation than optimism.  Hopper and Franklin come to the fore, but never assume a melody.  “Shovelfeet” concentrates on an off-balance two-note piano line that diverts the meter before Hayward’s beat regains control.  This frees Franklin to his synthesizer chords before he tries to disrupt the flow once again, sometimes with the two-note alteration and finally with lightning speed runs that break Hayward’s pattern.  Hopper holds the line and Picard flutters above it all, both oblivious to the struggle.  The disc closes with “Some Other Time.”  Hopper uses some electronic enhancement to his tone while maintaining the only constant in the piece.  His comrades thus are freed to solo at will paying attention only to Hopper’s slowing of the pace.

Numero D’Vol is just one of many fine releases involving the talents of Hugh Hopper.  He’s always able to surround himself with fantastic players and is quite well respected in his field.  My wish is that Hopper is able to fully recover from his illness and continue on with spectacular collaborations such as this.  He has much more that he’d like to say with his music, and he’s definitely speaking with an authoritative voice.