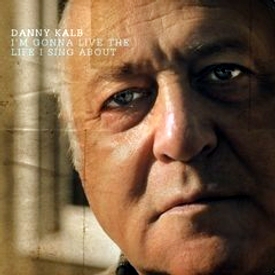 Blues Project founder Danny Kalb returns with a new disc of mainly acoustic blues standards on Sojourn Records’ I’m Gonna Live The Life I Sing About.  Kalb is backed on the collection by bassists Lenny Nelson and drummer and producer Mark Ambrosino with an occasional appearance by his brother Jonathan Kalb on slide guitar and harmonica.  Kalb describes the project as “the record I’ve always wanted to do,” and it’s evident that these are many of the songs that inspired a young, white kid from Mt. Vernon, New York, to take up guitar and pay tribute to the folk and blues legends of the day back in the mid-60s.  Although the CD booklet’s photos show a man that’s not been immune to the passing of time, these songs exhibit an infinite quality when handled by Kalb.

Kalb’s choice in material will not come as a surprise to dabblers in the blues or even rock music fans that have studied the inspirations of their heroes.  One of Kalb’s best choices is Tim Hardin’s “Danville Dame.”  With its “Who’s gonna be the man to put a ring on your hand” refrain, Kalb lays down the basic track with both acoustic and electric guitar backing voices and gives himself plenty of room to concoct some wicked solos and fills in between verses.  His mastery of his instrument has only improved over what was already celebrated 40-some years ago.  His vocal command pays respect to Hardin, but injects Kalb’s own blues-drenched delivery and results in a version that feels as if it was always intended to sound this way.  Spend a few minutes listening to Kalb’s reading of Jimmy Reed’s “Shame, Shame, Shame,” and you’ll know why Reed moved into electric blues rather than acoustic to present his folksy, Chicago brand of music back in the ’50s.  Kalb’s time machine showed him exactly what Reed attempted to do, and we now have the result available to us as well.

Kalb’s roots in folk and the blues may be best presented on his version of Willie Dixon’s “You Can’t Judge A Book By Looking At The Cover.”  Everybody and their mother has done a version of this song, but Kalb alters the phrasing just enough to serve as a nod to all that has gone before.  This song is an imbedded part of American culture, and Kalb’s treatment both celebrates that fact and offers up the respect that Dixon deserves.  The artist’s decision not to record an electric guitar part for the piece shows a discipline and respect that younger students would not have conquered.

I could rave on all day about this record.  From the blistering bursts on the opener, Billy Boy Arnold’s “I Wish You Would” to the stripped-back take on John Lee Hooker’s “I’m In The Mood,” Kalb shows us why this is the record he’s always wanted to make.  He could stop right now and leave us with the perfect statement on why he’s loved this music for decades.  Instead it’s serving as a jumping-off point for Kalb to enter into his own phase as a well respected master of uniquely American classics.