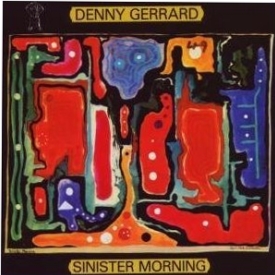 In the history of recorded music there’s been a lot of cool stuff released, hasn’t there?  If you share my attitude, you may one day want to work for Esoteric Records in the U.K.  If you also share my challenges of geographical ties and lack of experience in the record industry, you could do like me and just groove on what Esoteric does for music freaks like us.  They dig.  They dig deep.  And they find releases that have been long out of print, not because they’re not quality recordings but because the record industry needs new product for the marketplace.  Classic recordings that still move big numbers will never go out of print in one format or another.  The rest are doomed to disappear into obscurity after decades of unavailability.  But Esoteric has our backs.

What the hell am I talking about?  Have patience, my good reader.  Sit back and let this sink in.  While you’re doing that, throw on a copy of Denny Gerrard’s Sinister Morning.  Right, you don’t know who this guy is and you still don’t know what I’m talking about.  That’s OK, just put the CD on and keep reading.

Denny Gerrard did some work with Andrew Loog Oldham in the mid- to late ’60s following a move from his native South Africa.  Denny had training as a linguist and no one really knows how he ended up working in the music biz, but Loog manufactured a few singing duos that included Gerrard and recorded for Loog’s Immediate label.  Do you remember The Fifth Avenue?  How about The Variations?  No, me neither.  Same thing goes for Warm Sounds.  But Warm Sounds is the group that first attracted notice once they’d signed to Decca’s Deram imprint.  Warm Sounds’ “Birds And Bees” was rubbing shoulders with David Bowie’s “The Laughing Gnome” and Denny Laine’s “Say You Don’t Mind.”  The fleeting fame allowed Gerrard to handle some production duties for his contemporaries.  The most notable and the one that led to the creation of the record playing on your system right now was for a group called High Tide.  “Sea Shanties” saw the light of day in late 1969 and is considered an essential possession for followers of late ‘60s underground British rock.  No, I haven’t heard it but I’m very intrigued.

The intrigue was also floating around the studio as Denny Gerrard and High Tide supported each other’s musical desires.  Gerrard began recording his own record, Sinister Morning (yes, the one you’re listening to) during the “Sea Shanties” sessions using high Tide as his backing group.  Denny played acoustic guitar and harmonica while singing, but he needed an electric guitarist, bass player, organist and drummer to round out the sound.  Why hire somebody else when they’d already hired him?

So, what do you think of the disc?  You’re right; it’s nothing like the Hawkwind Jr. rumble that High Tide is supposedly responsible for.  It sounds a lot like a Bob Dylan record.  Maybe like if Dylan wrote hymns and used The Mamas and The Papas as his backup singers.  Maybe Quicksilver Messenger Service stopped by to jam with Dylan on this record. Or maybe Dylan spent more time concentrating on his singing than on his poetry.  No matter; this is a great record, isn’t it?  It was definitely recorded in the ’60s, but it’s stately and mature.  Gerrard really knew his craft, and he approached it with the eyes and ears of an artist.

Whatever happened to Denny Gerrard?  I don’t know.  Maybe he went back to studying languages and collecting Japanese folk art.  He’s sort of faded into the mists of time, I suppose.  And Deram Records?  Also long gone, my friend, taking Sinister Morning along as they left us.  But to those of you that don’t own Gerrard’s lone solo record, you needn’t fear.  It’s not an exclusive club of listeners sitting back in our easy chairs letting the music wash over us and remind us of simpler times.  Esoteric has your backs, too.  They dug this one up for us all to enjoy.