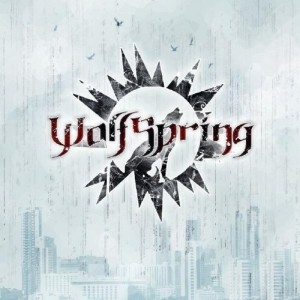 I’m going to be shifting away from the metal and prog that’s dominated the airwaves in my vicinity of late, but not without first telling you about an incredible release that I’ve been digging from 2010. It’s an English language project from a French multi-instrumentalist and member of the band Nemo called WolfSpring.  If you’ve been up on your neo-prog releases, you’ll want to make sure that this one doesn’t slip by you as nearly happened to me.

Jean-Pierre Louveton is a guitarist (and singer, and bassist, and whatever you’ve got laying around-ist) and songwriter that doesn’t speak a lick of English.  Yet he’d been encouraged for years by his friend William Mackie to try branching out to American audiences by incorporating words that we mono-lingual rock dogs could appreciate and understand.  The thought gestated in Louveton’s brain as he continued projects involving his band, Nemo.  Then late in 2009 he approached Mackie with ideas for a new project that he thought might be well-adapted for translation and he asked Mackie to help with the reworking of the lyrics.  Thus WolfSpring (the band and the album) was born and rounded out by musicians that could better handle the parts that Louveton didn’t want to tackle.  From Nemo, he brought keyboardist and occasional songwriter Guillaume Fontaine.  He also recruited metal drummer Ludovic Moro-Sibilot and German (yet English-speaking) vocalist Julian Clemens.

WolfSpring is a tight, near-future concept album “about the fall of a society built upon greed where the individual had become trampled upon losing their own identity”, according to the liner notes.  Aside from the story being set in a theoretical world indistinguishable from our own and set on one of many paths that mankind may stagger down, this is much more fiction than science fiction.  The tale is more about how we may feel after we’d screwed up all the fantastic advancements that we’d made as a society than about introducing some new scientific concept, although genetic mutation through generations of consuming chemically altered foodstuffs does play an important role in Louveton’s speculation on our downfall.  Thus WolfSpring requires a smaller degree of geekdom for the listener to wrap their head around the concept than most of the other prog records that I’d listened to in 2010.

So the concept holds up well, but what’s also important to note is that the music is complimentary to the theme.  Additionally, the eight song cycle does not require you to listen to the entire CD to appreciate what Louveton is laying down.  The tunes can be taken singularly, which is also uncommon for most recent prog records.  Beginning with “The Haunting,” a vignette concerning a man dying young after seemingly nonstop, backbreaking labor and whose “ghost” lingers on a century after his death, Louveton employs a wide variety of guitar techniques.  The combination of his tones and those of Fontaine at one point simulates a string section to great effect.  Of course Louveton delivers some finger-blistering shredding above Moro-Sibilot’s double bass drum thunder, but this is a slow to mid-tempo piece.  Clemens is in fine voice here and throughout.  Imagine Lou Gramm with looser trousers imitating Ronnie James Dio and you’ll come close to approximating the sound of the vocals.

Many of the songs’ lyrics set the stage for this world in decay, but two very excellent instrumentals are also included.  “Carpathian Wolves,” the shortest song at just under five minutes, has a main guitar line with maybe one of the most mind-piercing metal hooks that’s been heard since about 1985.  The rhythm guitar tracks keep things brutal while Louveton solos wildly over the top and Fontaine adds some much needed brightness in contrast.  “Howling With The Banshee” is a much slower number with a more delicate approach.  Think of John-Paul Jones’ keyboard part on Led Zeppelin’s “No Quarter” set to a scene of someone descending the stairs to a dimly lit yet well-equipped laboratory or someone else monitoring his air tank’s oxygen levels as he forces his way across a rocky field covered with swirling, toxic gasses.  When Louveton begins his emotional solo, that character has discovered the broken lock on the cage of the human-hybrid monster in the corner of the lab or is now wrestling frantically with the controls of his mask and attempting to reach the airlock in the distance.  It’s a slow build fraught with tension and not a word is uttered in the telling of the tale.

“Train’s Gone” has some of the best lyrics in the collection.  In this futuristic society (or is it in the world we live in?), dying young is a blessing.  The “job” you hold only allows you to live as a cog within the wheel and you lack true, lasting relationships with others or an identity that distinguishes you from the rest of the human flotsam around you.  Your standing is said to be your choice, but you question whether you really had any choice in the matter at all.  At the song’s climax, Louveton is throwing out measures of triplet pull-offs as if he invented the technique.  Clemens meanwhile has balanced melancholy with despair to better frame the bleakness of the song’s words.

One last song worth mentioning is “Now Or Never,” the CD’s slowest number and also its most optimistic.  The lyrics deal with the fact that death is not the only thing that levels the playing field for all and keeps us as equals, but also that the bond we share through human emotion makes it so that the castes we fall into in life become illusory.  We feel and ultimately die the same as all others, summed up nicely in the last line: “As the only true measure of wealth is feeling alive.”  Granted, this isn’t exactly an endorsement of capitalism as a successful path for humanity, but Louveton has been trying to show us the pitfalls of greed across the entire WolfSpring record.  This song’s slower pace allows the message to sink in more easily.  The musicians’ performances are more atmospheric and simplistic, but certainly not less remarkable and definitely the correct approach to take to support the thought-provoking words.

So, what’s next for Louveton?  I’d imagine there’s more on the plate for Nemo, but I’m not so secretly hoping that WolfSpring offers him some degree of success as well.  While I can certainly enjoy whatever music Louveton is creating, if he’s writing lyrics, I want to be able to understand them.  I’d like to listen to some of Nemo’s releases, but don’t want to invest the time and money into Rosetta Stone’s French lessons to fully enjoy Louveton’s work.  I turn to William Mackie to put a bug in Louveton’s ear  so more projects like WolfSpring are released in the US (thank you also, ProgRock Records) and I’m tipping off my fellow prog fans to shell out some money and support this great artist and his English language releases.