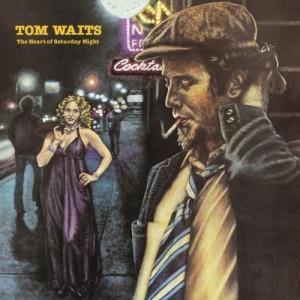 A good many of Tom Waits’ releases on the Asylum label were reissued on heavy duty 180-gram vinyl last year.  I’m way overdue for sharing a few words on this material with you.  Aside from having the music in my collection in a format that will stand the test of time, I’m reminded of the niche Tom carved for himself in the ‘70s before he took an extreme left turn by signing to Island and shocking us with Swordfishtrombones.  Today I examine his sophomore record, The Heart Of Saturday Night, from 1974.

A self-taught pianist who was most unimpressed with the adrenaline overdrive of Blue Cheer and their ilk, Waits instead embraced several types of music that were far removed from the psychedelic stew du jour.  Most closely identified with the singer/songwriter movement of the 1970s, Waits’ early material also drew upon folk, jazz, blues, showtunes and beatnik poetry.  To present his creations, Waits also invented a persona that he’s clung to with varying degrees throughout the decades – a chronicler of lowdown lowlifes and fellow denizens of the ramshackle roadhouses of Anytown, USA.  Live, his delivery was half-song/half-monologue, but his records presented fully crafted piano ballads and jazzy descriptors told from the bottom of a half-empty tumbler of whiskey.  His debut, Closing Time, finds him experimenting with this role, but he seems firmly set in character by the time of his follow-up, The Heart Of Saturday Night.

The album roughly focuses on a single concept, attempting to understand the elements that congeal into the much mythologized night of the week, its moments of triumph and mostly the moments of failure and dissatisfaction.  Take, for example, “San Diego Serenade,” with its story of a man that’s needed to hit rock bottom before understanding what he’s lost.  “Never saw the white line till I was leavin’ you behind/Never saw I needed you till I was caught up in a bind,” sings Waits to a sparse, piano-led arrangement which includes an orchestra conducted by Mike Melvoin.  The song never really provides an ending to the tale, instead choosing to serve as a window through which we observe the sad sack protagonist.  This is followed by the jazzier, yet no more optimistic “Semi Suite,” a tale of a truck driver’s “widow” and her attempt to reconcile why she persists in the lonely life she leads.  “Well you hate those diesels rolling/And those Friday nights out bowling/When he’s off for a 12-hour lay overnight/And you wish you had a dollar/For every time he hollered/That he’s leavin’ and never comin’ back” is how Waits sets the scene.  Tom Scott’s tenor sax is featured prominently alongside Oscar Brashear’s trumpet to compliment another moody vignette.

Side 2 elaborates even further.  “Fumblin’ With The Blues” spills out like a decorated New Orleans funeral march, but at least offers the desires of the song’s narrator rather than just presenting a snapshot of his predicament.  “You know the ladies I’ve been seein’ off and on/Well they spend your love and then they’re gone/And you can’t be lovin’ someone who’s selfish and cruel/They take your love and then they leave on out of town,” laments Waits to a backdrop of Tom Scott on clarinet (!), Melvoin on electric piano, Brashear once again, and the muscular upright bass of Jim Hughart.  Waits’ subject eventually concedes “Whisper tell me I’m the one.”  He’s looking for a lasting love and he ain’t finding it in this sleepy town.

“Please Call Me, Baby” presents a man who can’t seem to stop scrappin’ with his woman, but he wishes she were back with him every time he turns her away.  This is how Waits’ characters come across as more human than the romanticized archetypes you’ll find in other artists’ songs.  This guy is not perfect and he’s equally evil and honorable: “I admit I ain’t no angel/I admit I ain’t no saint/I’m selfish, I’m cruel/But you’re blind.”  Yet the best glimpse into the life of someone wrestling with the realities of his lot in life is set before us on the side’s closer, “The Ghosts Of Saturday Night (After Hours At Napoleone’s Pizza House).”  The music is played by Waits and Hughart alone, with Waits’ lyrics spoken rather than sung.  It’s a third person view of a man riding in a taxi and remembering a place he’s either just left or is going back to again – a service station/greasy spoon with both a breakfast and ring and valve special advertised out front.  The Saturday nights come and go for all of us, but there are those that stay behind and sweep up the ghosts we’ve abandoned as Sunday morning creeps in.  The promises and disappointments of Saturday night may touch any of us at some point in our lives, but the myth of its glories are greatly exaggerated.  Saturday is merely one night out of seven and one day stacks on top of another despite the significance we attach to any of them singularly.  Further, life goes on and yours may be rather similar to that of the next person walking through the door.

Tom Waits is an artist and a poet, taking music to levels seldom reached by his fellow songwriters.  He tried valiantly to get his statements out to us in a method acceptable to the record buying public in the ‘70s, but ultimately chose to focus solely on the art and not the medium.  The things you may love about Wait’s current material were also present on his early releases, but were obscured by convention.  Do yourself a favor and revisit Waits’ old stuff, and get it on vinyl.  You’ll hear that this is music that’s timeless and beautiful in its ugly depictions.  You’ll also want an occasional reminder that you’re not too different from a lot of other people in the world, and Waits probably sang your story at least once on each one of his records.