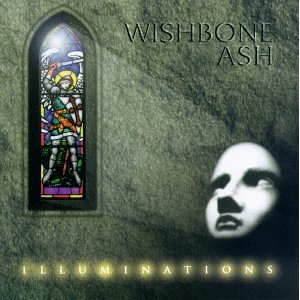 In the early 1970s, Wishbone Ash built an intensely loyal following by employing a dual lead-guitar attack, anchored by booming bass and coupled with majestic, often mystical lyrics. Their sound was a blurring of hard rock and progressive rock lines, with a splash of English folk thrown in for good measure. Albums such as Pilgrimage, Wishbone Four and Argus, particularly, were very influential. Thin Lizzy and Iron Maiden are just two bands who owe a huge debt to Wishbone for their twin-guitar harmonies.

Fast forward to 1996, after numerous lineup changes and a very different musical climate, original member and chief Wishbone Andy Powell was back with a new Ash composed of himself on guitars and vocals, singer Tony Kishman, Roger Filgate (guitars/bass/keyboards) and drummer Mike Sturgis. The band’s mission was to get back to roots, creating something with the musical vibe and quality of Argus. The resulting Illuminations is, mostly, a strong effort with plenty of tasty guitar

Illuminations opens on a very good note with “Mountainside,” a well-crafted track that sounds a bit like Yes, with some excellent bass via Filgate and a cool minor-key guitar line from Powell. “On Your Own” is a bluesy foot-stomper that could be a successor to Argus‘ “Blowin’ Free,” albeit with a darker groove. “Top Of The World” is Wishbone “lite,” a pedestrian tune that could have been done by any band. “No Joke” is more like it, with a slippery funked-up guitar line that detours midway through the song, heading south to Dixie, where Powell and Filgate trade swamp-ified Southern-rock leads. The album’s centerpiece, “Tales Of The Wise,” runs for more than 10 minutes, building from a shimmering ballad into a guitar and bass showcase and back again. Powell’s facility for melody seems limitless, and I love how his playing elevates a tune instead of separating from it – he’s all substance. Even when songs such as “Another Time” fail to conjure much excitement vocally, Powell is there to step in and lay down the law. The classic Wishbone sound truly comes to life on “A Thousand Years,” the best cut on the record and fully in synch with Powell’s vision. Everything works, from the stellar vocal harmonies to the thundering bass guitar. “Comfort Zone” is a fine slice of boogie rock, complemented by Sturgis’ excellent stick work. “Wait Out The Storm” is a rollicking number and another highlight. The opening riff has a subtle feeling of Van Halen‘s “Panama” about it that falls back on the spine of Filgate’s bass and Powell’s darkly tinged notes. Powell and Filgate close the show with the crystalline instrumental “The Crack Of Dawn.” Its gentle, fingerpicked arpeggios blanketed by longing pleas coaxed from Powell’s Flying V.

Many bands try to relive old glories, failing to accept the passage of time, or fall flat trying to be something they’re not. Illuminations finds a confident Wishbone Ash remembering their past while embracing the present. Thirteen years on, Powell would still be carrying the Wishbone torch, and this record is just one reason why.