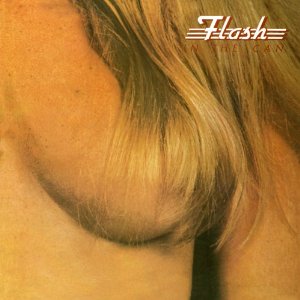 Flash guitarist Peter Banks first made his name with Yes, playing on the band’s first two records before departing and being replaced by Steve Howe. Banks carried on with Flash, a progressive act cut from a Yes-like cloth, with emphasis on guitar over keyboards. In The Can is Flash’s second album and features strong guitar work from Banks and bassist Ray Bennett, whose style strongly echoes Yes’ Chris Squire. Vocalist Colin Carter sounds a bit like an over-the-top Dennis DeYoung. Of the five songs here, three run 10 minutes or more, and are characterized by Banks’ angular guitar riffs and runs, jazzy vamps and hard-hitting percussion. The best of the lot is the closer “There No More,” which opens with a King Crimson-like riff and spins through a cosmos of hard and prog rock, moody jazz and improv. Fans of early Yes will find much to like here. And how about the cover art?