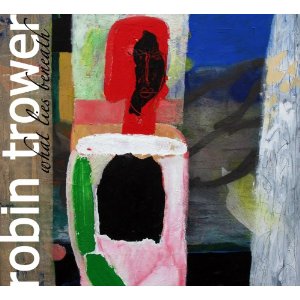 Robin Trower has been a guitar hero for more than 40 years, but unlike so many other players, his reputation has been built as much on what he doesn’t play as what he does. Don’t look to Trower for flurries of 32nd notes, flashy sweep picking or other often empty feats of virtuosity. Trower dazzles with his lyrical playing and mixing of rock with the blues. The mournful instrumental opener from 2009’s What Lies Beneath, “Wish You Were Mine,” encapsulates all that’s great about Trower’s playing: His mastery of tone and vibrato colors each note with subtle shades of light and dark; and his use of sound to create mood is unchallenged. The opening wah-wah lick of “What Lies Beneath” brings Jimi Hendrix‘s “Voodoo Chile” immediately to mind, but Trower takes a turn into a near hip-hop groove and grabs the lead vocal for a late-night spin through slow funk. And that’s, perhaps, the biggest delight of this album – hearing Trower sing lead. He has long used other singers to front his songs, but these performances make me want to hear Trower revisit earlier work and take the mic, too. “As You Watch Each City Fall (Part 1)” is atmospheric and straight out of 1974. Strings heighten the drama, and Trower sings with a voice, oaky and weathered, sounding like Mark Knopfler at times. The instrumental “(Part 2)” follows, as Trower travels through Pink Floyd space before returning to the moody theme of “(Part 1).” Other highlights  include the jazzy lyricism of “Time And Emotion” and the slow burn of “Find A Place,” framed in brooding arpeggios and featuring an intense Trower vocal. What Lies Beneath is a seductive, darkly beautiful work and one that gets my vote for top records of 2009. Calling it a return to form would be wrong. Trower has never lost it.