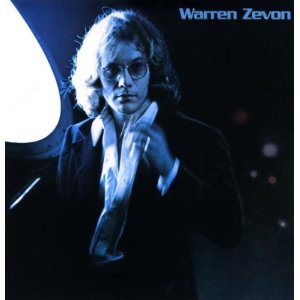 Warren Zevon has been checked out of the Terran Hotel for nearly eight years now. Yet despite an at times callous neglect by the survivors back here on Earth, his recorded output has had numerous reevaluations, both before and after his death.  With Rhino Records massive reissue campaign of the Elektra/Asylum catalog on both double CD collections, complete with demos and bonus outtakes, and on high quality 180-gram vinyl, we’re able to take one more look at Zevon’s underrated material.  I’m taking a look at his Asylum-issued, self-titled record today and asking myself how it wasn’t the enormous hit that it should have been.

Warren Zevon is actually the singer’s second album.  His first, Wanted Dead Or Alive, hit the shelves in 1969, seven years before the follow-up and to little fanfare.  What made his self-titled release different is that he was able to call upon the talents of numerous musicians with which he’d acquainted himself in his ten years in the music business.  Chief among them is the record’s producer, Jackson Browne, and he’s followed closely by a who’s who of Los Angeles’ Mellow Mafia.  Zevon had worked up a great deal of material and all of the songs on the record bear his name on the songwriting credits.  While Zevon would become well known for his use of satire and the way he deployed it in biting political and social commentary, the songs here also contain autobiographical elements which must have required him to dig deeply in order to boldly lay his soul bare to the listener.  In all, it’s a very strong piece of work and there are several moments which demand further discussion.

Side 1’s “Mama Couldn’t Be Persuaded” is pure autobiography.  It’s the tale of a family warning their daughter “don’t marry that gambling man” and how the daughter’s ignorance of the warning led to a chaotic and unsettled life for the daughter’s son with the gambler.  You see, Zevon’s father was in fact a professional gambler.  The need for a man with that kind of “job” to go where the action was hot and also flee to where the heat was not so hot caused the young Zevon’s family to relocate frequently.  His parents did eventually divorce when Zevon was sixteen, but by then his formative years had already left him with a skewed worldview.  To augment Zevon’s voice and piano on the song, Browne and JD Souther added harmony vocals, while Browne hired Waddy Wachtel for guitar duties and multi-instrumentalist David Lindley to play fiddle.  Wachtel’s lines are especially funky and really serve the upbeat approach of what could have been a song wallowing in lament.  Zevon’s casual display is just one example of how he fearlessly discussed any topic he felt was deserving of a good song.

Side one closes with “The French Inhaler,” which discarded Lindley, Browne, and Souther in favor of harmony vocals delivered by Glenn Frey and Don Henley.  Zevon’s almost baroque piano provides a mock elegance to this song discussing a woman who’s run out of luck and options in her pursuit of an acting career.  Now reduced to a junkie/wino/prostitute, her persistent allure is celebrated by Zevon, even though he “drank up all the money” during their relationship.  Though she’s sliding out the door of the bar straight into skid row, Zevon seems very aware that, for the turn of more fortunate cards, he could very easily be following right behind her.  The song, like many from Zevon, seems to be the skeleton of a screenplay for a heart wrenching movie that’s yet to be filmed.  Sweetening the dimly lit affair are the background vocals, which are as beautiful as any delivered by the duo while recording with The Eagles.

Side 2 has its own surprises, including the seeming forecast called “I’ll Sleep When I’m Dead.”  Zevon is on piano once more and he’s also playing some wicked harmonica.  He’s joined by Wachtel and the legendary Jim Kewskin Jug Band member Fritz Richmond on, what else, jug.  Browne also employed renowned studio drummer Gary Mallaber (Eddie Money, Steve Miller, Van Morrison, Bruce Springsteen) and longtime Zevon associate Jorge Calderon on harmony vocals.  The song’s protagonist likes to “raise a little harm” while “drinking heartbreak motor oil and Bombay gin” as prescribed medicine.  He’s describing himself, of course, and the life he’d been leading which dictated the nickname F. Scott Fitzevon.  He did escape the clutches of alcoholism later in life, but in the mid-70s he had no intention of slowing his pace and he was frank about that fact.

“Join Me In L.A.,” a lyrically sparse piece, is Zevon’s praise to the city he called home at the time.  With the singer switching to guitar on the song, Browne took up piano duties and left the harmony background vocals to Bonnie Raitt and Rosemary Butler.  Legendary saxophonist Bobby Keys (misspelled as “Keyes” on the jacket), famous for his work with The Rolling Stones, Bobby Vee, Buddy Holly, The Who, Harry Nilsson, and Joe Cocker, among others, gives a fiery performance.   The grande finale, “Desperadoes Under The Eaves” followed, complete with a string section and lush harmony vocals by Carl Wilson, Browne, and a mysterious outfit called “The Gentlemen Boys” (my guess is this is really The Beach Boys).  Zevon is drinking again and reflecting that California will slide into the ocean, but not until after he’s paid his bar tab.  There’s a brilliant verse – “Don’t the sun look angry through the trees/Don’t the trees look like crucified thieves/Don’t you feel like desperadoes under the eaves/Heaven helps the one who leaves” –that serves as one more reminder that, despite the ugliness and loneliness, L.A. is where Zevon planned to stay until he was done in by either his drinking or the San Andreas Fault Line.

Warren Zevon is a record that exemplifies all that was indicative of album rock and soft rock radio in 1976.  Yet he’d have to wait for the follow-up, Excitable Boy, two years later to gain any success.  He took more chances as his career continued, penning wilder lyrics and employing allegory to a greater degree.  Although listeners didn’t embrace the record as expected, it’s not because Zevon lacked talent, identity, or bravery.  He should have been famous right out of the starting blocks, but perhaps we remember him better as the man who stumbled first.