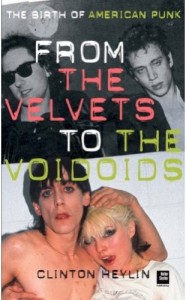 From The Velvets To The Voidoids by Clinton Heylin

So, who has time to read these days?  Well, I do…barely.  I recently plowed through a book that offered plenty of insight into a few of rock music’s more lively and mysterious chapters, From The Velvets To The Voidoids by Clinton Heylin, noted scribe of, among other tomes, the Bob Dylan biography, Behind The Shades.

Heylin’s mission was to set the record straight and dispense with, or argue against logically, the more persistent rumors and myths surrounding the birth of punk rock in America.  Originally published in 1993, From The Velvets consults with the prime movers behind punk’s explosion and the critics and scenesters drawn to the music like moths to the beer light over the pool table.  The version of the book that I purchased, the 2005 edition made available through A Cappella/Chicago Review Press, includes vital appendices and a scrappy postlude by Heylin in which he reflects on happenings in the twelve years following original publication.  These add-ons supporting Heylin’s discourse are as clever and informative as the book’s main body and I urge you to seek out this edition if you’re interested in also tackling From The Velvets.

As the book’s title alludes, Heylin traces punk’s rise chronologically by marking a starting point with Lou Reed’s introduction to John Cale and their subsequent deconstruction of R & B and experimental composition into an artistic, noisy prototype of what would later be recognized as punk rock.  Although Heylin levels most of his focus on the better known New York scene, he also bows to the very important breeding grounds in Detroit and Cleveland.  What was bubbling up in Michigan courtesy of The MC5 and The Stooges and further east in Ohio with the artists that would eventually join together as Pere Ubu is considered to be as important sonically as what was crafted by The Velvet Underground just a few years earlier.  This mishmash, this broken ground would finally coalesce into a vibrant display of counter-culture at NYC venues such as CBGB’s and Max’s Kansas City.  The embrace of the underbelly in Gotham was led by The New York Dolls, following the lyrical deviations of The Velvets, with their acting out the roles rather than just describing them through song.  Heylin pays little attention to anything brewing on the American West Coast or across the pond in the UK except to acknowledge what was witnessed by the rising stars in New York.

Dots are connected through From The Velvets that help to frame not only why this music was important and original, but where inspiration was streaming before being adapted by the artists.  For instance, the common connection from the Velvet’s love of free-jazz champions Albert Ayler and John Coltrane to The MC5’s interpretation of Sun Ra’s “Starship” on their debut record points us back in time to allow us to explore how this influence mapped a course for both John Cale and Wayne Kramer.  We also learn how Patti Smith’s Rimbaud-fired poetry readings first used musical accompaniment by fellow rock critic Lenny Kaye and then evolved into the cacophonous reinvention of rock standards by The Patti Smith Group.  Heylin also traces the escalation of Seymour Stein’s Sire Records label from the indie proponent of The Ramones and The Talking Heads into the Warner-distributed powerhouse it later became.  We’re also shown the sketches of tragedy and career destruction in the lives of Pere Ubu guitarist Peter Laughner, ill-fitting energy source Richard Hell, and downward-spiraling Dolls’ guitarist Johnny Thunders.

One thought on “From The Velvets to The Voidoids”