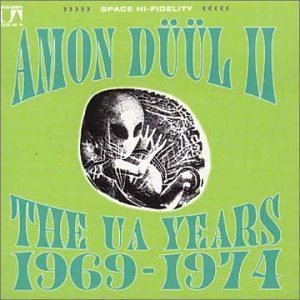 I’ve never been particularly fond of the term, “Krautrock.”  Aside from the rather derogatory way of referring to something of German origin as “Kraut”-whatever, it also implies that somehow all rock music coming from Germany has a particular stylistic stamp.  If we reverse-engineer this notion, we should be able to hear a piece of music and immediately identify it as having a German origin simply by the particulars of the sounds or approach.  As this is very untrue, I’ll dispense with the term as it exists more as the tool of lazy journalists who prefer to lump music into categories rather than seeking to employ more precise descriptions.  I’ll instead try to be as exacting as I can when talking about the experiments of the free-form ensemble called Amon Düül II.

Germany, like the US, saw a movement in the 1960s where segments of the populace longed to explore alternate methods of leading their lives.  One such commune near Munich, calling themselves Amon Düül (after Amon, the Egyptian sun god and Düül, a character from Turkish fiction) focused on multimedia communication, radical political commentary, and absolute freedom of expression.  Of course, music figured prominently in the commune’s activities, but a sub-group within the commune sought a more organized method of expression.  The more technically proficient Amon Düül II split from the main commune and set about releasing records of very powerful and demanding psychedelic rock.  The excellent Purple Pyramid label, a division of Cleopatra Records, has released The UA Years 1969-1974 on CD which, while being the best version of this particular collection, also serves as an informative overview of the first five years and eight albums worth of music generated by Amon Düül II.  Now that I’ve brought you up to speed with how this group came about, I’ll describe some of the disc’s high points.  These are the songs that will best encourage me to track the original albums to hear them in their entirety.

In 1969, Amon Düül II released their debut album, Phallus Dei (meaning “God’s penis”), on the ill-fated United Artists label.  Two excellent tracks on The UA Years showcase this release, “Kannan” and “Henriette Krotenschwanz.”  “Kannan” flows through many styles, from dark jazz to Eastern modes to raucous, Jefferson Airplane-inspired jams and back again over the course of four minutes.  With three percussionists, two guitarists, the eerie voice of singer Renate, and the rambling discourse of bongo player, Shrad, “Kannan” shows off an ensemble with a multitude of ideas and a great deal of promise.  “Henriette Krotenschwanz” backs this up with military drums and Renate’s amateurish, operatic vocals.

1970 saw a follow-up to Phallus Dei in their U.K. breakthrough, Yeti.  The album moved along a similar path, yet scaled back on the percussion and brought the guitars to the fore.  One of my favorites from this session and one of four tracks from Yeti on The UA Years is “Archangel Thunderbird.”  Here the band attempts an odd cross-pollination of punkier Hawkwind and “Louie Louie” with Renate’s shrill, disconcerting voice acting as a guide.  “Pale Gallery,” also from Yeti, counters this with its buzzsaw guitars shimmering in and out of phase and with its Saucerful Of Secrets organ while keeping Renate out of the studio.  In fact Renate never again appeared on studio recordings from the group and only showed up on the live sets Live In London and Viva La Trance, both originally released in 1973 and represented by a handful of tracks on The UA Years.

With 1971’s Dance Of The Lemmings, the group centered on more of a traditional rock band lineup and began embracing electronics in addition to their use of organ.  But one year later, Wolf City saw them augmenting their sound with the use of sitar, tabla, and tambura.  This moodier, yet rhythm-heavy take is exhibited on “Wie Der Wind Am Ende Einer Strasse,” a song that sounds a full 20 years ahead of its time.  They seem to have reconsidered this later in 1972 on their Carnival In Babylon release by shifting once more back to music that would resonate with fans of the top hard rock and prog combos of the day such as Deep Purple and ELP.  While the band was on to something at times forward-thinking and at times very wiggy, the collapse of the core working unit with 1973’s Utopia suggested that their best days were behind them.  Two songs from this final UA studio record offer proof on The UA Years.

The UA Years has definitely piqued my curiosity and encouraged me to track down CD releases of the early Amon Düül II recordings.  I’m always fascinated by different artists’ brands of psychedelic dementia and this band easily had as much to offer as the Pink Floyd records released following Syd Barrett’s departure and preceding Dark Side Of The Moon.  Had the band been on a more powerful and stable label than United Artists, they may have become more of a household name rather than one relegated to the dim corners of rock history.  The UA Years does not present the music chronologically, choosing instead to skip back and forth through the band’s eight albums.  I know this is problematic for purists, but it does tend to spice up the lesser material better than the collection could do otherwise.  Another drawback is that we are only hearing a sampling of tracks, almost like singles, from a psych-prog group that most likely intended their complete albums to be the artistic statement rather than through songs taken out of context.  All of this is easily overlooked if you, like me, are on a quest to learn more about the band’s changing sound before diving headlong into their back catalog.