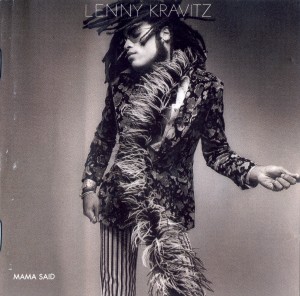 Back in 1991, I felt that the sophomore record from Lenny Kravitz, Mama Said, was a bit of a disappointment.  It came on the heels of an album that I was REALLY into, his debut, Let Love Rule.  Because I loved his first record so much, it seems likely that nearly anything would pale in comparison.  Flash forward to 2010 and I’m feeling that my initial assessment was way off base.  Let Love Rule will always be my favorite of the two, but Mama Said is, in its own right, a fantastic recording.  Here’s why.

Much has been made of how Lenny Kravitz wore his influences on his sleeve when he released Let Love Rule.  I never went along with those critics, despite spotting the obvious John Lennon odes, and instead viewed the album as the great sing-along that it is, with freshly crafted compositions and a very positive vibe churning throughout.  Everything had changed in Lenny’s life in the two years between his first and second albums, though.  The lovey-dovey, you’re-my-flower-child object of his affections on Let Love Rule, his wife Lisa Bonet, had filed for divorce.  Thus the lyrics on Mama Said instead reflected loss and sadness, even as Kravitz attempted to keep looking up.  Knowing what I knew about what was happening in his personal life tainted my impression of the record.  He no longer seemed as cool as I thought he once was.  That’s my immaturity and lack of life experience at work, you see.  When I instead take Mama Said on its own, apart from other artistic statements, it’s clear that Kravitz delivered a set of recordings that were as innovative as anything.  Yes, he reflects sounds that he’s heard elsewhere, but he doesn’t rip anyone off.  He’s not really even paying homage to anyone else.  He likes jazz, he likes soul, he likes disco, he likes hard rock, and it all comes out in his music as a mélange of who he is as a person and as a musician.

It was easiest for me to hang with Mama Said on the first two songs on the record and that has everything to do with his guest guitarist.  I was already a fan of Guns ‘n Roses, but had no idea that Lenny and Slash were actually classmates in high school.  They managed to reconnect and the top hatted string shredder laid down a solo on the opener, “Fields Of Joy,” that’s one of his best examples of conveying multiple emotions across an extended string of notes.  Say what you will about Slash’s post-GnR output, but the man is a god when it comes to lifting the role of lead guitarist above the staid conventions of hard rock.  As if the solo was only whetting our appetites, Slash stuck around to play lead guitar on the entire second track, “Always On The Run.”  Easily the burliest of the record’s 14 cuts, “Always On The Run” was also the first single released to the airwaves.  Featuring a top notch horn arrangement, it’s also pumped full of muscular funk and features Kravitz on all other instruments besides Slash’s part and the horns.

Kravitz relished the role of the “one man band” and he kept on that road with a few exceptions.  Engineer Henry Hirsch pops up to play a variety of instruments here and there and Sean Ono Lennon even dropped in to co-write and play piano on the song “All I Ever Wanted.”  Otherwise, it’s mainly Lenny’s show, and I do mean show.  He’s an accomplished multi-instrumentalist, even this early in his career, and his voice is amazing.

The lyrics of the odd, disco funk of “It Ain’t Over ‘Til It’s Over” fell flat on me at first listen.  Beneath the ’70s swirl of the string arrangement and the pulse of the bass guitar is Lenny clinging to the hope that he can resuscitate a dying love.  By the time I’d heard the song, the love I thought he was writing about was already over.  I thought he should have buried the tune rather than flesh it out as he had.  Listening to it now, I realize that the ideas he had for the song are genius, from the opening drum roll to the chiming sitar (all played by Kravitz).  In 1991, I had zero tolerance for anything resembling disco music.  Nowadays, there are elements of such songs that I can appreciate.

Another oddity on Mama Said is the groovy lounge experiment of “What Goes Around Comes Around,” the only song on the record that actually has a full rock band playing behind Kravitz.  The rimshot rhythm of drummer Zoro, the appearance of steady sax foil Karl Denson, and Henry Hirsch’s manipulation of the string machine all serve to accentuate Lenny’s falsetto lead and the layered harmony background vocals.  It’s not really a rock song, but more of a smooth, mid-tempo soul joint and something definitely absent from his previous album.

The quiet ballad, “Flowers For Zoe,” embarrassed me.  I knew that it was about feelings he had for his daughter (the song’s namesake) in the wake of the dissolution of his relationship with Zoe’s mom, but it seemed like something that should not have been laid bare to us.  The pain seeping through Lenny’s falsetto is almost too personal.  I don’t think I’d really experienced such emotion in song without it being concealed behind allegory or names being changed to protect the guilty.  I couldn’t fully understand Lenny’s floundering for the right way to express what he was feeling until I’d gone through a divorce myself and worried about the effect it would have on my son.  Anyone who’s been there knows what Lenny was trying to say, but the song’s weepy cello and the minor key chord progression on Lenny’s guitar part sort of pushes the thought too far.

The aforementioned “All I Ever Wanted” marks another left turn that Kravitz took on Mama Said.  Of course you know that he was in the clouds working with the son of his idol John Lennon, but Sean’s piano part is nothing more than minimalistic chords with a little doctoring on the choruses.  The song is more a showcase for Lenny’s impressive vocal versatility.  The echo chamber effect on his voice is right out of the Shaved Fish playbook, but he’s taking it from high falsetto to pained screams and back again.  The song’s simplicity is followed by the sparse blues of “When The Morning Turns To Light,” a trippy anti-heroin number with a tasty Kravitz guitar solo smack dab in the middle.  He eases this into the psychedelic, rubber soul of “What The Fuck Are We Saying?”  Henry Hirsch is responsible for the “I Am The Walrus” string arrangement, but the two musicians collaborate fully on this trip hop device that’s topped with another fiery Denson solo.

In retrospect, Mama Said will be remembered as more of a classic than Let Love Rule for a few reasons.  There are more radio hits present, it was Lenny’s breakout record, and he covers far more territory.  The experiments are the strength of Mama Said, even though Kravitz sacrificed the lush, stony pop approach to achieve success.  Perhaps I’ll grow to love this record even more in another 10 years or so, but it’ll be hard to remove the memories I have that are associated with listening to his debut nonstop as the ’80s came to a close.