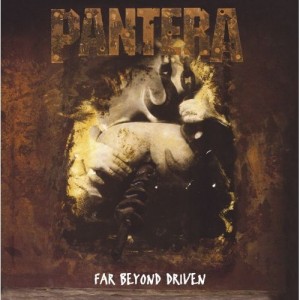 Back in August, I discussed the 20th anniversary release of Pantera’s Cowboys From Hell on 180-gram double vinyl.  Rhino Records is also responsible for re-releasing “slabs” of 1992’s Vulgar Display Of Power and 1994’s Far Beyond Driven.  Instead of taking the straight path of next talking about Vulgar Display, I’d rather present some thoughts on the heavier, sludgier Driven.
Praised and paid for by the metal masses, Far Beyond Driven saluted its ready-made audience by debuting at #1 on the Billboard album charts in mid-March of ’94.  It’s rather telling that the record met with such enormous success sound unheard.  In truth, the album does much to separate the wheat from the chaff and alienate fair-weather metalheads by shifting gears to a more abrasive delivery.  Pantera had now dispensed with anything resembling their disowned hair metal origins in favor of pure brutality.

Launching directly into “Strength Beyond Strength,” a more technically perfect version of Slayer’s brand of speed metal, the song slows at the mid-point to allow for a steamy showcase of guitarist Dimebag Darrell’s alarming invention, then resumes its neck-snapping pace.  Vocalist Phil Anselmo’s lyrics carve their way through the air, drawing a distinct line between the authority of police and president and the sweating, chemical imbibing, disenfranchised forces of the Pantera fan base.  The song isn’t even a warning shot forecasting a reality that is yet to come; it’s a dark, dark State of the Union address from atop Mount Hatred.  The listener is now either on board with Pantera’s battle plan, open minded to the spewed venom of the tortured artists, or has shut off their stereo.

Aside from being overwhelmed by the new depths of the band’s anger, it’s notable that Driven’s production has improved with the inclusion of drummer Vinnie Paul alongside Terry Date when directing the sound.  The band receives co-production credits as well, propelling them towards a more distinctive vision.  This angle is witnessed through the implied violence towards band critics in “5 Minutes Alone,” with Anselmo’s Mastiff bark of a delivery and the might of Darrell’s Kim Thayill-like guitar lines magnificently supported by the bass runs of Rex Brown.  Vinnie’s drums have more punch than heard previously, contributing to a sound bigger than four men should be capable of creating.

“Slaughtered” serves as the best example of how the band intends to convert the unbelievers BEFORE the band and its followers can be reached by the societal authority of religion.  The lyrics read more like a plan for world domination than a rebellious reaction to outside influences.  Dimebag’s complicated rhythm sets up Vinnie’s double bass drum bottom and they return to this theme when not trying to tear through the listener’s corpus colossum with even more complex riffage.  Far from sloppy, the song ends tighter than skin over a flexed bicep.

The continual return to the lyrical vehicles of sex, religion, drugs, and violence reaches its summit on “Throes of Rejection.”  Anselmo’s free-form poem questions existence of a god when facing sexual indifference and a sickening deliverance via chemicals.  The words are mostly spoken in a barely perceptible volume underneath the throb of the rhythm section and Darrell’s squonk, until the words erupt in screams of the damned.  With a feedback fadeout, the song dissolves into a straight reading of Black Sabbath’s “Planet Caravan.”  Although the recording exemplifies that Pantera were actually very skilled musicians, the choice of covering one of the mellowest Sabbath tracks may have made even Pantera feel a bit self-conscious.  This is addressed in Anselmo’s handwritten liner notes: “We think you’ll dig it.  If you don’t, don’t fucking listen to it.”  This is on the heels of Anselmo explaining that this is not a new direction for the band, even though they chose to close the record with a quiet moment after doing their best to force us to purchase hearing aids following the devastation of the eleven songs before this one.

Far Beyond Driven is not a warm listen by any stretch of the imagination, but it is extremely influential on the current direction of modern metal artists.  The musicianship had improved vastly, yet Anselmo retreated from his varied delivery on prior records and his use of an excellent singing voice.  The band had made the decision to embrace their followers and accept only the fame they would receive by staying true to their own artistic dreams, frightening as they may be.  Most critics agree that Driven is the last great Pantera album yet some wouldn’t even go so far as to include mention of this record in the same sentence as Cowboys or Vulgar Display.  I fall in with the former camp, not the latter.  True, things began to slide downhill for Pantera as disharmony crept up resulting from Anselmo’s drug use and the Abbott brothers’ disagreement on which drug he should be using.  But Driven, though not appropriate to all moods, remains breathtaking in its raw energy and unflinching nerve.  It IS a classic rock record, though you won’t, and shouldn’t, find it in everyone’s collection.