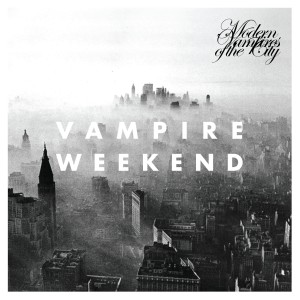 New York indie rock quartet, Vampire Weekend delivered their third full-length release for the XL label, Modern Vampires Of The City, just a few weeks ago.  Although the focus of this site is to call your attention to albums and artists from bygone days to make sure they don’t slip through the cracks of history and memory, there’s no reason why we have to wait until something is decades old before we turn you on to what you’re missing.  Therefore, it doesn’t matter if you’re 15 or 85, there’s something to be found on Modern Vampires that lends itself to your definition of “classic.”  As the album debuted at #1 on the Billboard charts, the band’s second release to accomplish this feat, you can rest assured that you won’t be alone in your appreciation.

Vocalist/guitarist Ezra Koenig and guitarist/multi-instrumentalist Rostam Batmanglij squirreled themselves away while composing tracks for this album, keeping in mind a few goals they’d hoped to accomplish.  First, they sought to better incorporate their penchant for world music by not making the elements and influences quite so obvious.  Second, they planned to soften the edges of modern digital recordings by using techniques mixing both analog and digital equipment with unconventional microphone placement.  Third, they intended to listen and re-listen to the recordings on a variety of devices, both hi-tech and low, to make sure that the final product sounded good to the listener no matter how they were enjoying the music.  This is a far cry from bands entering the studio with the simple plan to capture their take on their most recently composed and performed material.  That extra care exemplifies the evolution of artist-audience relations in that the audience expects so much more from artists these days and Vampire Weekend gleefully rises to the challenge.

The lyrics have always been something to which fans of Vampire Weekend pay close attention.  Correspondingly, the group crafted some clever morsels for thought.  Take “Unbelievers,” where the song’s protagonist questions why many people think he’ll burn for eternity because of his atheism.  “I know I love you/And you love the sea/But what holy water contains a little drop/Little drop for me,” sings Koenig to a backing that sounds like it will break into an early 1960’s car song by a surf-rock combo.  Warmly oozing organ tones and strategically placed handclaps sit atop precisely strummed acoustic guitars and the “Wipe Out” drumbeat courtesy of the group’s Chris Tomson.  Koenig’s lead voice is bright and lively as it roams effortlessly up and down its range.

Another series of fun moments is heard on “Diane Young,” which is a not so cleverly concealed reflection on checking out before one’s proper time (dying young).  The mish-mash of approaches to this song is exhilarating.  Stripped to its essence, it’s a late-50s rock and roll number, but between pitch-shifted vocals, Dick Dale guitar stylings, beeping synthesizers, and drilling machine noises the piece is transformed into something completely original.  Koenig’s celebrating living in the moment, but cautioning against the destruction of what’s important in life while doing so.  Koenig on what has been vs. what’s to come: “Nobody knows what the future holds/And it’s bad enough just getting old/Live my life in self-defense/You know I love the past cuz I hate suspense.”  This arrives after an incident of destroying a vehicle and being cornered by government agents.

Bassist Chris Baio plays an interesting part on the cut “Everlasting Arms,” which, if wordier, could easily pass for a selection from the Paul Simon songbook circa Graceland.  Sticking to the “three and four” of the measure while drummer Tomson goes a bit tribal gives a very non-Western feel.  There are string samples as well, which add an “I Am The Walrus” touch that’s most welcome.  They glide into a faux reggae on “Ya Hey,” a treatise on the disenfranchised.  The lyrical object is a person who fails to find love and acceptance from a variety of movements and political conglomerations.  In this context, he tries to determine just exactly what is deserving of his own love.  A familiar West African pop technique using a recurring and pitch-shifted voice mocks us while ornate synthesizer measures pepper the track.  It’s a complex song that does its best to sound uncomplicated and it largely succeeds.

The album closes with the Batmanglij-penned “Young Lions,” a lushly-beautiful cut using only the words “You take your time, Young Lion” across its minute and forty-five second length.  Instrumentation stays safely with acoustic piano, stark upright bass, synthesizer textures, and a brief vocal choir.  It’s a pleasant way to wrap up this collection of reflections on maturity and mortality, acting as a period rather than an exclamation point.

Yes, you’ll be branded as “a hipster”, or worse yet, “a joiner” if you trundle on off to buy this record right now.  But if you’re the kind of music listener that I think is attracted to these posts, you won’t give a damn what anyone else has to say about Vampire Weekend unless their music stands up – old or new, veteran or upstart.  But if you believe me about anything I have to say about music, you’ll agree that this album will be held in the same regard that we hold releases by The Police or The Cure today.  Pop music?  Yes, indeed!  But pop coming from someplace yet unvisited and absolutely entrancing.