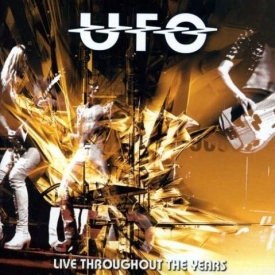 When discussion of the greatest live rock albums arises, one usually mentioned is UFO’s Strangers In The Night, a thrilling set of the band tearing it up in 1978 –  and what would be the last live recording for 15 years with guitarist Michael Schenker. UFO have always (mostly) been at their best on stage, and the four-CD set Live Throughout The Years presents the legendary British outfit, with and without Schenker, across three decades. We get a show from London’s Roundhouse recorded in April 1976, a set at the Hammersmith Odeon in 1982 and a two-disc topper from Vienna, Austria, in 1998.

UFO purists will probably focus on the Roundhouse and Vienna shows, as they feature Schenker’s gorgeous  guitar playing – first as a full-fledged band member, and second in one of the many reunion guises UFO have entertained as the mercurial axe-slinger has entered and left the fold. Both gigs are white hot and  chock full of classic tracks – “Doctor Doctor,” “Rock Bottom,” “Lights Out” and “Too Hot To Handle” – along with chestnuts including “Oh My,” “Electric Phase” and “Out On The Street.” It’s cool to hear the band playing “Shoot Shoot” in 1976 and then jump ahead to hear them pound it again 22 years later.

The real gem of the batch is the 1982 show, where touring on the release of Mechanix, UFO rely heavily on material from that album as well as The Wild, The Willing And The Innocent and No Place To Run. With “new” guitarist Paul Chapman front and center, the boys confidently bring the post-Schenker songs to the Hammersmith and smash the place to bits. Tunes such as “Let It Rain,” “Long Gone” and “No Place To Run” can (and should) sit proudly next to “Love To Love” and “Mother Mary.” The show is raw, crazy with energy and rocks like a mother. Most important, it sounds like a live show – a great, live, show. Mogg is a master working the audience and sounds like he’s having the time of his life, and the crowd throws it right back – the clapping threatens to derail “Only You Can Rock Me,” as the rapt audience members joyously jump ahead of the beat, pounding their hands together in “not quite 4/4” time. And Chapman admirably proves his six-string mettle with some fantastic soloing, particularly, on “Doing It All For You” and “Makin’ Moves.”

The encore “Mystery Train” is positively spine-tingling. Mogg first lays the bait, heartily thanking the crowd before asking, “What? You think this is a party?” Chapman then plays an intro on acoustic guitar, foreshadowing the tune, and getting everybody pumped. Enter electric guitar, bass and drums in one swirl of beautiful rock fury. Just listen to Andy Parker’s drums, if nothing else.

I’ll come right out and say it: The 1982 show is a better live “record” than Strangers In The Night.  It’s a superb disc and worth the purchase of the entire box – none of which disappoints.