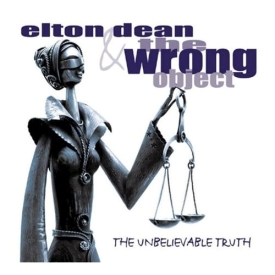 The Unbelievable Truth is a white hot, live recording of a one-off gig uniting the late, former Soft Machine Alto Saxophonist, Elton Dean and the Belgian psychedelic-jazz quintet and former Frank Zappa cover band, The Wrong Object.  Brought together through long distance appreciation and file swapping each other’s music, the combo had intended to collaborate further before Dean’s untimely passing.  What’s included on this release is a meeting of kindred spirits as they first played together at Glaz’Art in Paris, France, on Oct. 18, 2005.

The record’s name is taken from guitarist Michel Delville’s original piece; one of three Delville compositions presented here.  Dean also contributed three compositions with the seventh song being a spontaneous, original free-form piece titled “Millennium Jumble.”  “Jumble” allows Dean to stretch out over the frame of percussionist Laurent Delchambre’s wild drumming, Delville’s spastic noodling, and bassist Damien Pollard’s repetitive menace.  The dust doesn’t settle until 12 minutes later following a frenzied build-up.  Dean’s solos are very characteristic of the style that made him legendary.  The Wrong Object is happy to let him do his own thing, just as he cuts them the slack to make their mark.  One example is Delville’s soloing on the title track, which pulls from some of Zappa’s more Arab-influenced work.  Dean lays back and lets him fly.  Dean knew that this mutual admiration society had insisted that he lead the set with his trademark “Seven For Lee” and also include a piece that he had been touring around with The Soft Machine Legacy, “Baker’s Treat.”  But the horns gel on the melody line of the band’s “A Cannery Catastrophe,” with Dean leading the younger Fred Delplancq on tenor sax and Jean-Paul Estievenart on trumpet.

It’s not only a treat to hear one of the final performances of Elton Dean on The Unbelievable Truth, the music is a great reminder of the fertile jazz fusion scene in the mid-70s.  Many artists that were pushing the boundaries of jazz have been considered merely rock musicians by historians and popular memory.  The Soft Machine was onto something new and exciting during Dean’s tenure with the group.  Similarly, Zappa, feeling confined by the rubber room of rock music, dove feet first into jazz following the demise of The Mothers.

The Unbelievable Truth thus serves as a passing of the torch in two ways:  Dean’s acknowledgment that this little Belgian combo really got what he was trying to do 30 years ago is the torch that was meant to be passed in this musical relay, while the smoking stub left behind by an artist who dropped out all too soon is the other torch enshrined by this collection.