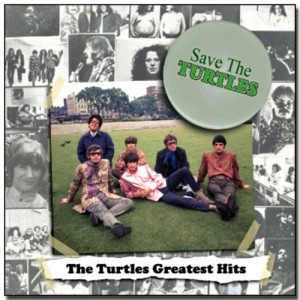 The Turtles, like many of their ’60s pop-rock peers, aren’t remembered as an “album” band, largely due to the popularity of a handful of hugely successful singles. But The Turtles were far more adventurous than most one-hit wonders of the day. And though their reputation was built and remains on “boy-meets-girl” love songs, it’s startling to hear the contrasts of tunes such as the innocent “Can I Get To Know You Better” paired against “The Grim Reaper Of Love.”

A cover of Bob Dylan‘s “It Ain’t Me Babe,” was the band’s first single and brought them almost immediate success – their first show was before 50,000 people at the Rose Bowl, opening for Herman’s Hermits. Then the harsh demands of the music biz set in, and the group’s future was suspect, until… The smash hit “Happy Together” broke the band across America and remains the perfect 3-minute pop song. Its Brian Wilson-like innocence comes through in not just the lyrics but Howard Kaylan‘s pouty vocals.  “Elenore” presages the power-pop that Badfinger would perfect very shortly, with its lush chorus and gorgeous harmonies. “She’s My Girl” is a trip into pure psychedelia, with a bizarre banter of rapidly spoken poetry fading to a chorus that could have come from The Beatles‘ White Album.

The Turtles may not have been as innovative as The Beach Boys, but the twin talents of chief Turtles Mark Volman and Kaylan ensured whatever the band recorded would be interesting. And vocal arrangements on tunes such as the ethereal “Love In The City” are on par with the best of the Beach Boys’ material. The jangly guitar and clip-clop drumbeat make it irresistible. For me, it’s the great lost Turtles’ song. “Me About You,” with its crystalline trumpet line and remarkable string arrangement – listen as the cello enters at the 1:59 mark – is another highlight.

Most greatest hits packages are for casual fans only, but Save The Turtles is one hits package that delivers for the longtime fan as well as those wanting to peak under the shell and learn more about this vastly underrated band.