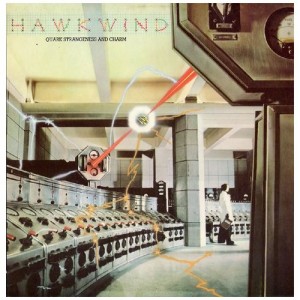 By the time Hawkwind released Quark Strangeness And Charm in 1977, the band had evolved from a space-rock jam machine into a leaner (albeit, still spacey) rock and roll outfit. Bringing in bits of electronica and new wave, Hawkwind’s sound morphed into something that practically defies description. Toss David Bowie, T. Rex, Gary Numan, Ducks Deluxe, Roxy Music, Television and Pink Floyd into a blender and you might churn up something like the music so gloriously decorating Quark, Strangeness And Charm. Vocalist Bob Calvert‘s voice and sci-fi lyrics helped bring out the best in the songs and turn QSAC into what many call the definitive Hawkwind album.

From the opening chords of “Spirit Of The Age,” it’s crystal clear that Hawkwind haven’t abandoned space, but where they once traveled through gauzy nebulas and expanding galaxies, they’re now riding elevators through some imaginary space station. “Damnation Alley” is a nifty marriage of four-chord rock and new wave, adorned with deftly placed synth passages. “Fable Of A Failed Race” is a beautiful, dreamy musing on origins. The title track slyly pokes fun at Albert Einstein’s lack of luck with the ladies: “One thing he missed out on in his theory/Of time and space and relativity/Is something that makes it very clear he/Was never gonna score like you and me…” “Hasan I Sabhah” sounds like Magma doing pub rock, and features some wicked violin from Simon House. “The Forge Of Vulcan” is an eerie piece of instrumental space rock, flooded with synthesizers, a sequenced loop and heavy metallic accents, signifying the forge. “The Iron Dream” is a short instrumental that rides on a charging blast of guitar chords. “The Days Of The Underground” sounds like a lost Peter Gabriel solo track, with an angular riff, spooky keyboards and chilling vocal effects close to Gabriel’s “Games Without Frontiers.”

Quark Strangeness And Charm is a quirky, strange and charming album, and one whose sound presages so many bands to be in the coming years.