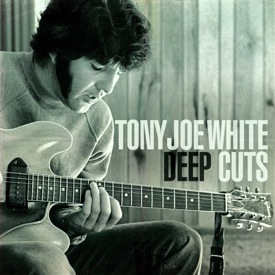 Every now and then an artist that’s been lurking around on the fringes of the music scene will step out of the shadows with a record that completely blows us away.  Tony Joe White is one of those artists, and Deep Cuts is one of those records.  Hipsters from back in the day will remember White from his 1969 monster hit “Polk Salad Annie.”  Since then, he’s been involved in all sorts of interesting projects, such as serving as the opening act on tours by Eric Clapton and Roger Waters, and writing and producing for Tina Turner, and has been given much love by fans throughout Europe.  White’s music has been slowly building a new following in America, and Deep Cuts might just be the record to bust everything wide open for him.

Although Tony’s never been one to shy away from incorporating many styles of music, including pop, funk and even disco, into his sound, his first love has always been for dark, Louisiana blues.  His son Jody is brought in as producer on Deep Cuts, released on Tony’s own Swamp Records, with a modern use of hip hop beats beneath new interpretations of Tony’s own favorites.  The set is kick-started with the nearly instrumental grinder, “Set The Hook.”  Recently used in the TV show CSI, the song is ready-made for a backdrop to some swampy mayhem.  White’s guitar has all the bite of a hungry gator and his blues harp and grumbly vocal fill set the scene perfectly.  By contrast, “As The Crow Flies” is a straightforward blues workout in a live band setting.  The funky backbeat approximates the hip hop rhythm of “Hook” as White’s guitar buzzes to heighten a sense of dread conveyed by his fantastic vocals.  A spectral, nearly invisible keyboard line contributes to the spook factor.

The longest of these Deep Cuts is White’s return visit to “Willie and Laura Mae Jones” where the stay lasts nearly seven minutes.  He’s using a variety of guitar sounds on a steamy gumbo of heavy drums, deep whispering voice, Hammond organ and clean leads.  The story is so captivating and the music so dense that we could easily stay engaged with White for another seventy minutes with no complaints.  At just a few seconds shy of the stay at the Jones’ place is “Soul Francisco,” which feels more much more like an epic.  White’s paean to the children “wearing beads and all kinds of funky clothes” comes complete with live and sampled beats, great use of cymbal crashes, an organ line that Rick Wright would have been proud of, a petite string section and an intentionally psychedelic guitar solo.  White sounds like Isaac Hayes in his very husky vocal delivery.  This song alone should be enough to qualify Tony and Jody for some Grammy nods.  The whole record isn’t just about darkness and mystery, however.  Tony serves up some “Homemade Ice Cream” with a brighter tone to his guitar and a happy, back porch harmonica with a side of strings on this instrumental piece.  It’s enough to keep us smiling as we break out the rock salt and fresh cream for an afternoon treat.

Deep Cuts is one of those works that drops out of the sky and has us asking where this dude’s been hiding for the last 40 years.  Now in his mid-60s, White is more full of life and ideas than ever before, and looking a bit like a haggard and world-wise Elvis.  I might have overlooked this gem collection, but I’m pleading with you not to make that mistake.  And after White gets done thanking his fans in Europe, Australia and New Zealand with some live appearances, you might want to go catch his stage show as well.  I can’t imagine that an artist this brilliant is only capable of delivering the goods when laying down tracks in the studio.