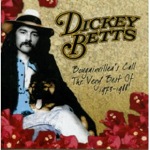 Legendary guitarist and songwriter Dickey Betts (of Allman Brothers Band, Great Southern and Dickey Betts Band fame) was captured on film by Arnie Goodman at a recent concert in New York City. Whether toting a Gibson Les Paul or Fender Stratocaster, Betts makes the guitar sing. Check out the nearly 100 images of Betts and bandmates tearing it up.