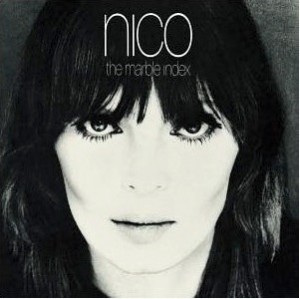 Eight songs that read more like German folk-tinged, experimental dirges than pop or rock music; such is Nico’s second solo record, 1969’s The Marble Index. With arrangements by her former Velvet Underground cohort John Cale and production by the enigmatic Frazier Mohawk, there have been few major label releases since that have cast commercial potential aside in pursuit of the artist’s skewed vision.  Elektra first took the chance by releasing the record four decades ago, but Sundazed has reissued the long out-of-print vinyl edition of this influential classic for renewed consideration. The record is not for those looking for something to tap your toes to or sing along with, but if you’re looking to trace the influence of Karlheinz Stockhausen on pop music or find one of the starting points for blending the gloom that would coalesce into latter day goth rock, The Marble Index is a “must have.”

Nico, fully influenced by the heroin that would contribute to her 15-year addiction, wove her joyless stories and adorned them in John Cale’s chaotic woodwind, string and accordion trappings. As a study of Cale’s genius, The Marble Index is also essential. It’s hard to come away from listening to the record without a sense bafflement or depression. In its disregard for the conventions of modern music, Index was better able to convey Nico’s disconnection with her world of acting, modeling and performing. That world left her empty and in search of greater meaning and truer emotion. The stark landscapes within Index might only have been hinted at if Cale and Mohawk had incorporated beats or traditional rock instrumentation. Instead, often rhythmically at odds with Nico’s poetry, Cale chose not to restrain his avant-garde tendencies and let his own dark demons out to perform as they will.

The Marble Index, then, is a vital element of a respectable record collection, not so much in its contribution to the body of important songs committed to tape, but more in its historic impact and as a document to what can be conceived by a unique artist and then crafted in the studio to give life to her nightmares.