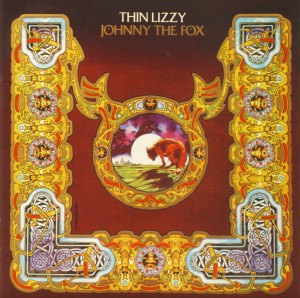 Irish hard rock band Thin Lizzy certainly knew how to take the wind out of their own sails.  After the phenomenal success of the Jailbreak album, a resulting tour should have pulled all the unconverted rockers over to their camp.  However band leader/vocalist/bassist Phil Lynott contracted hepatitis and was sidelined from the road.  Never one to rest, Lynott proceeded to write a follow-up album during his recuperation, and thus was born 1976’s Johnny The Fox.  All the elements of the classic Thin Lizzy sound are present—twin harmony guitars, Lynott’s soulful vocals, workingman narrative lyrics—but the record lacked the magic of its predecessor and was also missing a standout track such as “The Boys Are Back In Town” or “Jailbreak.”  Despite this, it remains a classic ’70s rock record and one which I’m proud to say I’ve finally been able to cross off of my “must buy” list.

Johnny The Fox appears to be a sort of half-hearted concept album with its repeated use of characters, but one linear theme is not maintained throughout.  Instead we’re presented with Lynott’s familiar tales of love and love lost, greed, fighting, and dreams.  And although Thin Lizzy tends to be lumped into the hard rock category, they continued to delve into other genres such as funk, folk, and country.  It’s notable that this is the last record on which guitarist Brian Robertson appears on all tracks and his chemistry with longtime axe slinger Scott Gorham is as dynamic as on the Jailbreak album.  Further, drummer Brian Downey nearly steals the show from Lynott himself.  His unshakeable rhythms were clearly the glue that held this band together.

So what went wrong?  Why didn’t Thin Lizzy become the superstars that they should be?  True, their influence can be felt across many generations of rock and roll bands, but they’re not nearly as well known as contemporaries such as Aerosmith, Deep Purple or even REO Speedwagon.  It’s actually a bit baffling that this record was not appreciated at the time of its release, but I think the answer lies more in the importance of touring in support of an album’s release in the ‘70s than it does in the actual material contained therein.  In fact, you can drop this record’s name to any fan of hard rock and they’ll tell you that they love it.  Unfortunately, that loves exists 34 years too late and long after the death of Lynott.

Track by track, the album jumps all over the place.  But that was also the case with Jailbreak.  The first cut, “Johnny,” is as groovy as it gets.  The subdued guitar line in combination with Lynott’s bass is completely seductive and Downey’s fills are ridiculously good.  One complaint, and this is also true of many Thin Lizzy recordings, is that there’s not enough separation of the instruments and Lynott’s vocals are not brought up higher in the mix.  Producer John Alcock is to blame here, but those that followed in his footsteps only did marginally better at correcting this problem.  In fact, there are horns on the song “Johnny” that are oddly buried beneath everything else.

The second cut, “Rocky,” is also a clever rock tune with great use of the harmony guitars on the bridge and synchronization of the guitars and bass on the verses.  Lynott’s voice has more soul in one syllable than most singers develop throughout their entire careers as he sings of Rocky Rock, the Rock and Roll Star.  The music falls short of what I would consider “metal” and is more like the electrified R&B championed by The Who and The Small Faces but kicked up to a higher level and maintaining a superior groove.

Speaking of groove, it doesn’t get much funkier on a rock record than what’s laid down on “Johnny The Fox Meets Jimmy The Weed.”  If I sampled records for breakbeats, which I don’t, I’d be all over this song.  Lynott delivers some nearly disco bass fills and his voice is gritty and comin’ atcha from street level on this tale of the criminal underworld.  The guitars scratch and soar alternately to set mood, but no one seems all too eager to jump out into the spotlight and the solo is rather unimpressive.  When Lynott wants to sing about crossing the paths of a former lover as on “Old Flame,” he’s similarly restrained.  There’s nothing really “wrong” about this mid-tempo ballad and the performances are actually quite good, but no one, not even the singer is allowed to run away with anything at all.  The guitar solo’s a pretty mass of crying tones and trills, but seems to be cut short before a full idea can develop.  The thought here may have been to use this song as the single and therefore abbreviate it to allow for airplay. A shame.

And just when we think there won’t be any surprises allowed on the album, the last track erupts to blow us all away.  “Boogie Woogie Dance” contains one of the most complex drum parts you’ll hear outside of a Rush record as Downey totally assumes control.  This song is kind of a throwaway because it’s not really telling a story in the way that we’re used to hearing one from Lynott.  Instead it’s a showpiece for exactly how tight and imaginative this lineup of Thin Lizzy was.  Lyrically it’s Lynott’s take on “Land Of A Thousand Dances” and will never be considered one of Lizzy’s best songs, unfortunately.  Sometimes just farting around in the studio can produce some amazing results.

Whatever your opinion of Johnny The Fox, it’s a great snapshot of what was going on with Thin Lizzy during their roller coaster flirtation with success in the mid-70s.  I don’t regret buying it for an instant and owning it will likely lead me to tracking down more of their studio work.  I just can’t help feeling a bit sad that the record served more to hold them back than to push them forward at this critical period in their career.

2 thoughts on “Thin Lizzy-“Johnny The Fox”: What went wrong?”