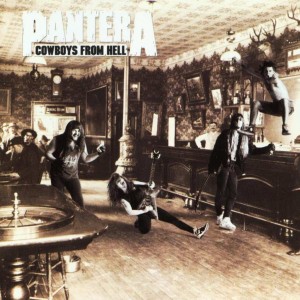 A landmark metal record is celebrating its 20th anniversary this year.  The Texas quartet Pantera released Cowboys From Hell in 1990 and succeeded in influencing many hard rock artists with their style of “groove metal” during the two decades following Cowboys’ release.  Originally released on ATCO Records, Cowboys was such a drastic departure from Pantera’s earlier, independently-released, hair metal albums that the group and most of their fans consider it to be their proper debut.  The album eventually received Platinum certification earlier in 2010, buoyed in part by the inclusion of the title track in the Guitar Hero 2 video game.  There are several other reasons for the album’s staying power and for its consideration as a “classic” rock record here on classicrockmusicblog.com, chief among them the fantastic guitar playing of Darrell Abbott and the flexible vocals of singer Phil Anselmo.  This blog entry discusses a few examples of the group’s groundbreaking performances that stood out to me while I was listening to the Rhino Records 180-gram, double vinyl reissue copy that I’ve recently acquired.

Being a latecomer to Pantera’s music, I had only been familiar with a handful of tracks on Cowboys From Hell.  I did not realize that the record was produced by one of my favorite metal producers, Terry Date (Soundgarden, Fishbone, Slipknot), who actually compresses a bit too much of Pantera’s sound than I would prefer on this recording.  My son and a few of my co-workers had turned me on to the title track, the brutal “Primal Concrete Sledge” and the brilliant “Cemetery Gates” some years ago, but it’s a kick to hear those songs now within the context of the record’s full artistic statement.

Leading off with the song “Cowboys From Hell,” the record drops the listener into a riff that’s seemingly picked up as the studio’s machinery is first fired up.  The riff-master is, of course, “Diamond” (not yet known as “Dimebag”) Darrell who’s exhibiting a powerful combination of range, speed, and rhythm and continues to do so throughout the course of the album.  He’s not only the main instigator of the song’s groove, but a very innovative soloist.  As the group’s sole guitarist, he’s obviously required to wear a few different hats, but that doesn’t guarantee that he’ll be successful at all the tasks required of him.  Abbott, however, possessed the skills to impress on multiple levels simultaneously.  I know that he’s supported by his brother Vinnie Paul on drums and Rex Brown on bass, but the recording unfortunately does not break the sounds of the musicians apart as much as I wished it did.  The drums don’t sound enough like drums and instead are very heavily treated.  The bass is a bit too murky for my tastes and Brown’s performance, as on the rest of the record, mostly straddles the line between keeping up with the drummer and echoing the melody of the rhythm guitar.  The song is thus exemplary of the rest of the album in that it’s really all about the capabilities of Darrell and how his performance inspires the rest of the group to attempt to match his accomplishments.  The exception is Anselmo, who seems to be in a world of his own.  The song’s lyrics are rather dopey, “we’re comin’ to yer town to get ya” rudimentary metal clichés, and that gives Anselmo the freedom to deliver them any damn way he pleases.  He delivers in spades with his pre-heroin, pre-barking-into-the-microphone-through-cupped-hands form that’s about 80% James Hetfield and 20% Rob Halford.  Glimmers of the hair metal days shine through, but he’s only retained the best elements of that style in favor of something altogether different and infinitely more powerful.  That I’ve devoted so many words to a single song ought to tip you off to the fact that there are a lot of things going on here.  It’s the perfect record opener and also the perfect title to use for the name of the album.

A flip of the vinyl and a skip of the needle to the track “Cemetery Gates” reveals a depth to Pantera’s music that was only occasionally reached on future recordings.  I’ve read other blogger’s descriptions of this song as being Pantera’s “Stairway To Heaven” and I heartily agree in that the song is at times lush, beautiful, moving, jam-heavy and chilling while also being atypical of the rest of the band’s catalog.  Anselmo is singing of his reflections upon attending the funeral of a lover and his search for a way to deal with his loss and move on with his life.  Over the course of the song, he employs every weapon in his vocal arsenal: near operatic phrase-enders verging on the style of Queensryche’s Geoff Tate, astoundingly complimentary harmony lines, Halford-esque falsetto trade-offs with Darrell’s guitar tones, and crushing screams a la Testament’s Chuck Billy.  Darrell’s delivery also draws upon all he’s capable of as well from ornate acoustic sections, to piercing pinched harmonics, to fuzzed-up riffage.  Rex Brown’s bass moves from holding the rhythm while Darrell deviates to fill, to body-jarring tones.  Vinnie also steps to the fore with occasional, rhythm-breaking, cross-kit battery.  The co-worker that shared this song with me is in no way a metalhead and the comp on which he included the track also included two-tone British ska and Brazilian pop.  I’m not saying that Pantera will also appeal to all fans of those types of music, but “Cemetery Gates” certainly struck a chord with at least one music buff that didn’t include much metal in his regular diet.  It’s a phenomenal song by any music fan’s standards.

“Cemetery Gates” is followed up by “Domination,” a violent call for rebellion issued through the description of the alternative to freewill.  The song is pure thrash with some of Anselmo’s most tortured singing on all of Cowboys.  Vinnie Paul’s double bass drum is used to great effect in setting up each of Anselmo’s phrases and Darrell delivers a duo of blinding solos.  His hyper-kinetic fill over the tune’s slowed-down ending is jaw-dropping.

The third side of my double-vinyl version of Cowboys also yields a few songs worth mentioning.  “Clash With Reality” has another of those unbeatable riffs in the song’s set-up and then, to a lesser degree underneath Anselmo’s far-ranging assault.  Here he’s sounding more like John Bush from Armored Saint as if Bush was trapped in a torture chamber.  The solo delivered by Darrell is not metal in any way, but it fits perfectly in the midst of the band’s circular time changes and penetrating groove.  Hot on its heels is “Medicine Man,” a tale of a charismatic shaman told through lower register spoken word and blistering falsetto.  It’s perhaps one of the darker songs on the record, but sets up Darrell’s blindingly fast solo better than most.  In fact, Darrell’s stinging harmony leads serve as a clever tribute to Judas Priest and also a shocking contrast to Anselmo’s creepy gloom.

Cowboys From Hell was not Pantera’s breakthrough recording, but it was the first to begin presenting the style with which they’re best remembered.  There is a glut of ideas presented here that were spawned from their choice to abandon image and focus purely on the music they could create.  There were several more releases that followed Cowboys which not only cracked the market wide and gave them more radio airplay, but also solidified their sound and Anselmo’s more gruff and pained delivery.  Cowboys From Hell is easily a metal classic and contains one song, “Cemetery Gates,” which is worth the purchase of the entire album and stands out as one of the finest rock songs ever recorded.  I can safely say that I’ll look back 20 years from now and be able to say the same things about this exemplary album.