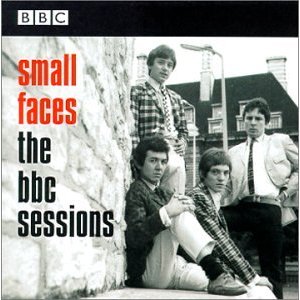 Here’s a little gem that I picked up not too long ago in an attempt to learn more about a band that had very limited success in the U.S. but was dominant in the UK charts in the mid- to late ‘60s.  Although the CD is only 10 years old, it’s a bit hard to find at a reasonable price.  Don’t let that discourage you, however, from seeking it out.  Small Faces were the real deal and The BBC Sessions is an outstanding archive presenting their performances on five different occasions ranging from 1965 to 1968.

Led by the highly underrated singer and guitarist, Steve Marriott, Small Faces was at first a mod band not unlike The Who.  Mod groups (as opposed to Rockers) favored fashionable clothing and an undying love for American R&B.  Although the band would morph their sound as their talents rapidly developed, and incorporate folk, British dancehall, and psychedelia into their repertoire, the groove and vocal style predominant in R&B would always remain a factor in the equation of Small Faces’ music.  Early crowd-pleasers “Watcha Gonna Do About It,” “Jump Back” and Holland-Dozier-Holland’s “Baby Don’t You Do It” are the best demonstrations of what the band first set out to accomplish.  This trio of tunes is taken from the BBC’s Saturday Club broadcast from August 23, 1965, and show off not only Marriott’s already impressive skills, but also those of bassist Ronnie Lane, drummer Kenney Jones and original organist Jimmy Winston.

March 14, 1966 saw the combo return to Saturday Club to show off not only how quickly they were advancing as musicians, but also to exhibit better chemistry with replacement organist, Ian McLagan.  This set led off with a very straight cover of Sam Cooke’s “Shake” and followed with their latest hit “Sha La La La Lee.”  The third song from this broadcast is the one that shocked me the most.  Much has been made of Led Zeppelin’s thievery of Willie Dixon’s lyrics in their “Whole Lotta Love,” but I was not aware that Small Faces stole first with a song credited to Marriott and titled “You Need Loving.”  The bigger shock though comes from the realization that Robert Plant not only stole songwriting credits from Dixon but also stole Marriott’s delivery of lines like the famous “You need cooling” and “You need love.”  If you haven’t heard Small Faces’ version of this song, listen and prepare to lose a lot of respect for the mighty Zep.

Less than two months later, Small Faces returned to Saturday Club on May 3rd with another set of three songs.  Marriott’s pop song “Hey Girl” started things off and featured not only Marriott’s range as a singer, but also a pogo bass line from Lane, awesome organ changes from McLagan and very Moon-esque fills from Jones.  The better known “E Too D” followed and showed a band beginning to stretch out and experiment as they hadn’t done previously.  This jam is probably our first clue that Marriott was feeling constrained by formula and unable to put a full nelson on his urge to work on his craft as an artist rather than just remain an interpreter of others’ music.  They closed that night with one of my favorites from The BBC Sessions, “One Night Stand.”  This song is virtually a roadmap for the career of Paul Weller both in The Jam and afterward.

Small Faces made one more appearance on Saturday Club in 1966 on August 30th.  Now just over one year after their first BBC gig, the band was in far greater command of their instruments and racking up new material.  “You’d Better Believe It” lit the way that night, but was easily eclipsed by the next two tracks.  “Understanding” and “All Or Nothing” presented the fruit of the Marriott/Lane songwriting partnership in a powerful manner.  “Understanding” is like the missing link between the Motown sound and Michigan’s soul-powered garage rock combos or the lighter moments of The Vanilla Fudge.  “All Or Nothing” sounds like it sprang fully formed from the collective mind of pop songsmiths from the entire decade preceding this recording.  The BBC was right to track the progress of this highly underrated band as they did by welcoming Small Faces back so frequently.

Bad management deals, drug experimentation and a dramatic shift in creative direction prevented the band from appearing on The Beeb again until April 14, 1968, this time on the program Top Gear.  Although this is also the period just weeks before the group released their brilliant concept album, Ogden’s Nut Gone Flake, this BBC broadcast is not exactly my favorite moment of the disc.  It leads off with the cover of the folk/rock standard, Tim Hardin’s “If I Were A Carpenter”.  Marriott’s voice is in fine form and the band is really rocking out, but I question the song choice given that Marriott was writing his own incredible material and needn’t have covered someone else’s.  This is followed by the studio version of “Lazy Sunday,” a dancehall parody song that Marriott reorded as a joke and their record label released against the band’s wishes.  The set is saved somewhat by another cover, “Every Little Bit Hurts.”  Here again, the band is busting loose and Marriott is singing like a man feeling sentimental as he’s roasted over coals.  But, why a cover tune?

The disc closes with five interview snippets from the broadcasts (four with Marriott and one with Jones) that are rather revealing and serve more to whet my appetite for something that really got further into the band’s brains than what time allowed for on the programs.  Still it’s fun to hear Marriott defend his need for the “fantastic volume” used in Small Faces concerts, how they choose singles from amongst their many recordings, and how sad it is to have low attendance at gigs in large venues versus the joy felt by packing them in at the small ones.

Whether you’re big fan of ‘60s British rock or if you’re just looking to fill holes in the music history that is your record collection (like I was), you ought to track down The BBC Sessions—released in 2000 on Varese Sarabande.  You won’t regret parting with your hard-earned cash for a single moment as you find out for yourself just how excellent Small Faces were.