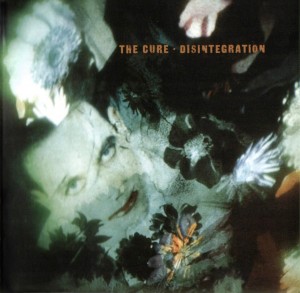 In celebration of the 21st anniversary of the release of The Cure’s commercial breakthrough, Disintegration, Rhino Records has issued a special-edition double album, 180-gram vinyl version of the record.  In listening to my recently acquired copy, I’m reminded of the darkly brooding majesty of this album and why, in many ways, this is the most important release in their catalog.

It’s 1988 and Robert Smith is approaching the age of 30.  Despite the recent success of the double album Kiss Me, Kiss Me, Kiss Me and the ensuing tour in support of its release, depression has set in.  Smith decides that all important artists have released their magnum opus before that magic age and he has yet to produce a work which satisfies him in that regard.  Depression gives way to self-treatment with LSD, and the combination of barren thoughts and bent reality slowly oozes into the music Smith begins writing.  Casting aside the pop experimentation found on Cure records from the four previous years, Smith returns to a sound with which the band has been primarily identified, the “goth rock” murk last visited on Pornography.  Those ideas are expanded upon, layered, labored over, and revered as Disintegration.  Composed of 12 epic songs averaging over six minutes in length, it is the masterpiece Smith sought to create.

Generalizations can be made when discussing Disintegration and those clichés involve typical descriptors of The Cure’s sound, but the depths plumbed by Smith in the creation of this record produced archetypes rather than regurgitations.  Contrary to opinions from Elektra Records, who hoped Smith would pursue what they believed to be a more marketable path, the public had a differing view and were willing to accept whatever The Cure might release.  Their previous body of work had a strong cult following and the darkness found in early works by the group was as well loved as the pop singles infiltrating the airwaves.  Smith was ultimately right in following his own artistic path and at least four singles from Disintegration (“Pictures Of You,” “Lovesong,” Lullaby” and “Fascination Street”) were released to great success.

When I think of a “typical” Cure sound, I recall the powerful combination of Robert Smith’s underrated, heavily treated guitar, his tortured wail of a voice and the driving bass of Simon Gallup along with synthesizer contributions from Smith, Gallup, and the keyboardist du jour.  This sound does in fact permeate Disintegration, but there are a number of standout moments which bear further description.  Chief among them is the unabashed emotion found on “Lovesong.”  Listeners may have thought that Smith was singing this song sarcastically, but he was actually trying to sing the most honest love song he could sing as a wedding present to his fiancé.  It’s easily the most upbeat of the songs on the album and the shortest at just shy of 3 ½ minutes.  With its simplistic organ and drums beneath Smiths’ voice on the verses, its string pastiches and a concise solo from Smith, it’s the only thing that saves the record from becoming an absolute gloomfest.

Contrast “Lovesong” with “Last Dance” in perfect song sequencing to return to melancholic remembrance.  Gallup’s high register bass soon drops to the low end before Smith begins his tale inspired by the sadness of aging.  He’s telling a woman how glad he is that she came to see him, but he’s choking on his longing for how things used to be as he recites the lyrics.  “Fascination Street,” easily one of the best cuts on the record, follows soon after and remains another defining moment for Gallup.  There are not as many songs that are characterized by their bass lines as there are those for which the voice or melody summarize the piece.  The entire song seems to be based around his repetitive pattern, setting a stage for Smith to venomously encourage us to drape our goth flags around us as we move about the world.  Guitars are used more for effect than to “play us a tune” and Smith reveals his genius in choosing not to cut loose in his performance.

Some of the best lyrics are featured on “Prayers For Rain.”  Smith, his guitar running comparably clean of effects, uses “rain” and his relationship to the unnamed object metaphorically to describe any stifling situation.  He’s “suffocated,” “strangled,” “entangled,” “shattered,” and all the while praying for rain to rid him of the affliction.  Boris Williams’ drum pattern moving across the kit and down to the deeper toms deviates from Roger O’ Donnell’s synthesizer — lifting and attempting to reach a major chord yet never giving us that release.  This is perfected songcraft at its finest: complex in concept and simple in execution.

“Homesick,” a song that reads as the antithesis to “Lovesong,” demonstrates how Disintegration has an underlying theme of dissatisfaction and destruction running throughout.  Where Smith told his sweetheart that she makes him feel like he is home/whole again on the latter piece, “Homesick” has him describing being “stuck in honey” and being inspired with the desire “to never go home.”  He’s caught in something that he knows is not good for him, but the passion of the moment prevents him from seeing his true needs.  His paralysis provides an unholy nurture for the toxic relationship.

Even records that are viewed as marginal by critics and Cure fans alike have brought me great joy (odd that a band so dark can make one happy) over the years.  The more discerning collector should start with releases that best represent how Robert Smith’s tormented soul can be brought to light.  Disintegration is thus the obvious starting point and is as brilliant now as it was two decades ago.  Vinyl junkies should seek the version that I have for that rich sound that we’ve come to love from the Rhino reissue series, but those who are more digitally inclined should seek out the 3-disc CD package which includes all the B-sides and live material released in conjunction with Fiction/Elektra’s initial and lengthy promotion of the Cure’s best album.