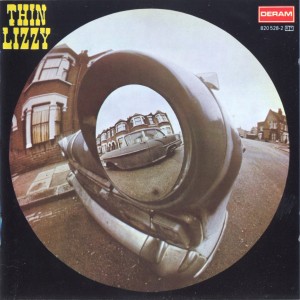 In October, 2010, Decca Records released an expanded version of the debut record by the legendary Irish hard rock band, Thin Lizzy.  I’m glad that I waited until then to add this CD to my collection as the bonus tracks offer quite a bit of insight into the origin of this highly underrated combo.

Originally released in 1971, Thin Lizzy presents a tight trio of musicians obviously influenced by The Jimi Hendrix Experience and Cream—with a twist.  The rural upbringing of vocalist/bassist/songwriter, Phil Lynott, lent considerable Irish folk influence to the group’s material.  Thus the band introduced themselves to the world with a record presenting funky rock numbers, folkier pieces inspired by Bob Dylan and Van Morrison, and an added dash of American country flavor.  One of the numbers, “Ray-Gun,” sounds as if it was stolen directly from Hendrix, with guitarist Eric Bell stomping away on his wah-wah pedal, drummer Brian Downey coming near to the skills of Mitch Mitchell, and Lynott’s quickly-developed bass playing far from lacking as his powerful, soulful voice rises to the top.

The group also rocks out on “Look What The Wind Blew In,” which has Bell multi-tracking his guitar lines to produce the familiar twin harmonies for which Thin LIzzy would later employ two musicians.  Bell, who’s not usually remembered as well as the numerous other guitar alumni from the band’s history, levels a steady stream of impressive fills at lightning speed across the song’s length.  “Return Of The Farmer’s Son” gives the group a lot of room to stretch out and shows off some of Lynott’s most impressive playing.  Downey, who continues to amaze me each time I listen closely to Thin Lizzy’s material, is a force to reckon with here, making full use of every corner of his drum kit.  Bell’s guitar does sound to be slightly out of sync with the rest of the band, but I think that’s more due to the rushed recording of the album than to an inability of his to keep up.

“Clifton Grange Hotel,” a slower number with its lyrical setting in an inn managed by Lynott’s mother, again shows off Bell’s abilities with numerous unrelated guitar parts overdubbed throughout.  Downey’s restraint, and also his understanding of exactly when to let loose, is showcased nicely.  “Saga Of The Ageing Orphan” lets Lynott switch to acoustic guitar as Bell picks up his 12-string for a pure, sad ballad.  This isn’t always an easy feat, but Thin Lizzy was able to pull back the tempo and draw down the lights without anything coming across as forced or melodramatic.

The original 10-song album closed with “Remembering (Part One),” a song that varied its approach from pounding, driving hard rock to melodic nostalgia and back again.  It’s also the song where the band sounds more like Cream than any other on their debut, with each musician given opportunity to highlight their performance with parts distinctive from what was laid down by the group’s other members.  This is reminiscent of another Cream-influenced power trio, Rush, and how they would often have all three musicians “soloing” at the same time on early works, more like a jazz combo than a rock band, before reconvening for a grand finale.

The reissue’s bonus tracks consist of two groupings – a five song maxi-single/EP originally released shortly after the band’s debut hit the shelves to see poor sales, as well as four tracks which had been overdubbed and remixed back in 1977.  The centerpiece of the EP is a track called “The Farmer,” a song exhibiting Lynott’s love of American country music.  The Irish have historically embraced America’s twang, but it’s a bit amusing to hear Lynott affecting a Tennessee drawl while inviting “won’t y’all come again; your faces keep us warm.”  It’s telling, however, that Lynott clearly identified with a laid back lifestyle rather than the quicker pace of big city living, at least early on in his writing.  “Remembering (Part Two): New Day” sees a return to the Hendrix style but with Lynott’s voice beautifully rough around the edges and gravelly.  Bell’s solo is one of the more unusual approaches I’ve heard from a lead guitarist as he’s ending his phrases with power chords after blurring sextuplet pull-offs to the changing keys.

The 1977 overdubbed tracks, with additional parts recorded by Lynott and guitarists Midge Ure and Gary Moore (who passed away in his sleep earlier today, February 6, 2011).  Moore manages to take “Look What The Wind Blew In” into overdrive with a more metallic sheen than on the original.  Note that Downey’s drum tracks remain untouched; why mess with perfection?  As much as I love the heavier side of Thin Lizzy’s music, and this side is more attractive than the folk numbers on Thin Lizzy, Lynott’s re-recorded vocal on “Wind” does not improve over the original, despite the added punch.  Another keeper in the overdubs is “Dublin,” with Ure adding heavier layers of guitar and background vocals to the slow lament.

This reissued version is the best way to hear the earliest material from one of history’s best hard rock bands.  While the material would only improve on later albums, and the band had yet to settle on a solution for reproducing the twin guitar lines in a live setting, Lynott’s vision is solid and impressive early in the band’s career.  Thin Lizzy is a band that experienced tragedy and blown opportunities which prevented them from becoming more of a household name, but I’m even more intrigued to track down missing pieces to my collection after hearing the band’s often neglected debut.
-Mark Polzin