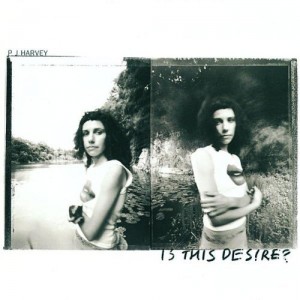 If you’ve not heard of the amazing British performer Polly Jean Harvey, it’s difficult to recommend a release in her catalog which serves as a suitable starting point for the uninitiated.  If you trust my opinion, then I’d steer you toward a CD that I’ve recently purchased in order to fill a hole in my collection, and one which P J herself considers to be a mark of excellence, 1998’s Is This Desire?

Recorded at a difficult time in her life following a break-up with singer Nick Cave, Desire demonstrates how Harvey’s penchant for privacy allows her to experiment with new approaches to musical style and performance without being tainted by expectations and current trends.  Shuffling between her home in Dorset in southwest England and London with co-producer Flood, Harvey relied on her usual cast of musicians, multi-instrumentalists Mick Harvey (of The Birthday Party and The Bad Seeds) and John Parish, drummer Rob Ellis, and keyboardist/bass guitarist Eric Drew Feldman (Captain Beefheart and Frank Black) to interpret her darkened ideas.  Her physical retreat from the spotlight is evident in Desire’s songs as Harvey eliminated her previous embrace of loudness and theatricality.  The result was surely one of her most personal records and perhaps her gloomiest.

A short record, Desire clocks in at just over 40 minutes.  The twelve songs bounce between slower numbers and occasional bombast, but Harvey’s incredible vocal range is exhibited throughout.  One example of how she can deftly elevate from a low coo to a screech is on the CD’s shortest track, “The Sky Lit Up.”  The song rocks uncharacteristically and actually seems to be about a very enjoyable evening, yet after less than two minutes Harvey ends the piece with a piercing note that pours liquid nitrogen down the listener’s spine.  This is balanced by the song “The Wind,” where Harvey is literally whispering the lyrics to a very danceable beat.  While seemingly describing a very lonely woman, Harvey’s words are actually referring to St. Catherine’s Chapel near her Dorset home.

Harvey later slows the pace way, way down on “Electric Light,” her voice barely audible above a deep and quavering keyboard and distant bass and snare drums.  Obviously there’s obscured meaning to the lyrics explaining how the thought of a beautiful woman under electric light, with dawn approaching outside, continues to tear the singer’s heart out.  A similar low-register keyboard line permeates “The Garden”, but this time the drums are brought way up in the mix, leading the path for layers of elegant piano and organ changes.  Harvey sings of a man walking through a garden and enjoying a kiss with a songbird, unaware of trouble taking place.  This is perhaps Harvey’s most blatant lyric, reflecting upon her failed relationship with Cave.

“Joy” is a song about anything but.  It describes a woman, unwed at 30, with no hope of finding bliss.  The woman suffers from a mysterious “condition”, made more mysterious and creepy by the industrial clang of some sort of ship’s bell, a dance beat, and the throb of a synthesizer.  Harvey’s vocals are rather mournful in her attempt to capture Joy’s lack of her namesake emotion.  “The River” describes a couple approaching the body of water with the intent of crossing to remove all trace of the path that led them there.  It’s a minor key number dominated by piano and accented by extremely deep voices singing the chord changes.  It’s easily the saddest song on all of Desire.

“No Girl So Sweet” embarks on similar terrain to Desire’s other lyrical moor.  Harvey’s delivery is louder, but meshed within the rhythm track, as she sings of a woman taken from Heaven and given to a man on Earth.  The unnatural union’s pain is felt more than it’s heard.
Collectors will not be satisfied with the standard CD release and may opt to pursue the edition which includes a five track bonus disc, yet I caution you that there is not much revelation included there.  The main focus is Desire’s lead single, “A Perfect Day Elise,” which is rounded out by studio outtakes of unfinished songs and others that did not fit the underlying theme of Desire.

Start with this CD if you want to hear the release that P J Harvey herself feels she will be hard pressed to top.  Don’t choose this record if you’re in the mood for something uplifting, because you’ll be sadly disappointed.  Having been converted to her fold long ago, I find Is This Desire? to be one more example of why I love Harvey’s voice and unique approach to songwriting and recording.  I have yet to be unhappy with anything I’ve heard from her and I’m very glad that I’ve ticked another of her records off of my “must buy” list.