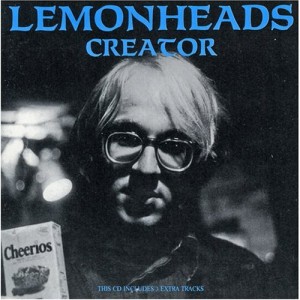 The late ‘80s saw numerous bands across the country begin to evolve beyond their hardcore punk roots as they learned how to write pop hooks while maintaining their youthful intensity.  The two most notable outfits making the jump from indie label experimentation to major label polishing were Minneapolis’ Hüsker Dü and The Replacements.  But traveling Eastward in 1988 to Boston’s flourishing punk scene would have brought you into contact with another developing combo called Lemonheads.  At that time, Lemonheads (not yet known as The Lemonheads) were fronted by two singer/guitarists, the better known inheritor of the band’s legacy, Evan Dando and his dominant co-conspirator, Ben Deily.  While each guitarist took his turn at the mic, singing the songs he’d written, Deily exerted more control over the group as they released their second album for Boston’s Taang! label, Creator.  Creator presents a band with members in their early 20s, still happily farting around with nods to Satan and Cheerios as they tried in vain to repress their expanding musical ideas.  The result helped to kickstart a pop-punk wave which is still prevalent in popular music today.

Deily’s “Sunday” begins as anything but a punk shredder and returns to layered guitar lines when not careening down the halfpipe.  It covers a lot of ground in around two minutes, managing to roll alongside Meat Puppets licks as it blurs by.  It comes just shy of blending pop and punk seamlessly, but makes valiant and successful attempts at both.  Dando’s “Out” by contrast is a darker, slower, murky number which forecasts approaches taken by Dando on his more drug-damaged experiments on the latter Atlantic Records Lemonheads releases.  Deily’s skills eclipse Dando’s at this point, but both are branching out beyond the garage.  Yet if you thought Dando was looking to become more serious, your dreams were dashed as he covered the Charlie Manson/No Name Maddox song, “Your Home Is Where You’re Happy.”  Only a kid (or Axl Rose) would think covering a Manson song would be funny for longer than a few minutes and Dando’s immaturity is worn right up front.

The silly covers don’t end there, however.  The album jacket lists “Luka” (later actually recorded by the band) crossed out, with “Plaster Caster” written next to it.  So “Plaster Caster,” Gene Simmons’ nod to the team of phallic replica collectors, it is, and Dando sings it as if he wrote the song himself.  But Dando’s goofs are greatly outnumbered by the Deily originals.  Side 2’s “Take Her Down” and “Postcard” are examples of some of Deily’s best.  “Take Her Down” is pure early Hüsker Dü – breakneck pace, solid bass way up in the mix (courtesy of Jesse Peretz), and frenetically mutating guitars.  “Postcard” is its acoustic counterpart – sweet and vulnerable with nary a sign of punk aggression.

It’s hard to say what would have happened if Deily and Dando could have continued working together, but as with post-Syd Barrett Pink Floyd, there are those Lemonheads fans that consider anything past the original incarnation as merely a pale comparison of how it all started.  Dando was the better singer of the two, true, but it seems that he could only have soldiered on with ownership of the band’s name after his own immaturity had forced his more talented rival out of the group.  Don’t get me wrong; I quite enjoy the post-Deily Lemonheads recordings.  But Creator marks a point in the band’s catalog where they were right on the verge of something bigger, better, and stillborn which would turn into something altogether different in just a few short years.  What if…?
-Mark Polzin