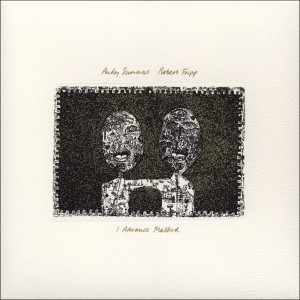 What does my lovely and long-suffering girlfriend buy me for Christmas?  Me, with my dissonant rants about the “genius” of various prog rock guitar legends; she with her love of the music from a time, decades past, when popular music was embracing new and exciting experiments brought to teenagers through the wonders of early MTV; and us with our shared appreciation of bands from that period which broke new ground, such as The Police and Blondie.  The choice was obvious to her, I Advance Masked, the first of two collaborative records released by Police guitarist Andy Summers and King Crimson leader (and Blondie guest musician) Robert Fripp.  She’s a very nice lady, that girlfriend of mine.

I imagine the shock of music fans, in love with the Police’s music, that purchased Masked in 1982 with the expectation that this may be some sort of stopgap between The Ghost In The Machine and the forthcoming Synchronicity.  Fascinated with the charms of the ever-hunky Sting and the charisma of kit master Stewart Copeland, I doubt these listeners thought much about Andy Summers’ role in The Police.  Throw on any Police song which isn’t a blue-eyed reggae homage or a punked up rocker and listen to the guitar lines.  It’s sometimes hard to recognize that the washes and swooshes setting the tones for the songs were actually exuding from the effected guitars of Mr. Summers.  Think of Zenyatta Mondatta’s Grammy winning instrumental “Behind My Camel” or Ghost In The Machine’s atmospheric “Invisible Sun” or “Secret Journey” and you’ll realize the original ideas brought to the studio by Summers.  He’s the kind of guitarist that relies mostly on layered depth of sound rather than laying down some variations on a blues lick, much like Rush’s Alex Lifeson or Primus’ Larry LaLonde.

As Robert Fripp was in the midst of a flurry of activity with the early ‘80s King Crimson, Mark IV, he continued to devote quite a bit of time to other recording projects with musicians for whom he shared appreciation.  Thus begat I Advance Masked: 13 instrumental pieces produced by Summers and Fripp with the duo also playing all guitars, synthesizers, basses, and percussion.  It’s quite unlike anything released before or since by The Police and is actually quite “Frippy” (no, my girlfriend didn’t understand my term either), fitting more closely with Fripp’s work with Crimson or collaborations with Brian Eno.  The record also serves as proof that Summers and Fripp have a large degree of similarity in their styles, contrary to the finished, full band sound of releases from either of them on other projects.

Beginning with a simple 4/4 bass drum thud and Summers’ bending, whammied chord, Masked’s title track (the accompanying video briefly featured in some sort of rotation on MTV) very quickly evolves to levels of Fripp’s eighth-note lead line and alternating solos from both guitarists (Fripp’s a dizzying run of sixteenth-notes and Summers’ a more conventional “rock” take) with a recurring burst of synthesizer (probably heavily effected guitar) swells beneath it all.  The steady beat is what anchors the track and provides the most attractive element for listeners not accustomed to “Frippery.”  Mind you, the musicians have no intention of keeping anything normalized on the rest of the record, however.

A good example of the deviations found throughout Masked can be heard on “New Marimba.”  Although a similar, steady 4/4 beat propels the track, this time accompanied by a single note bass line to the same meter, Fripp is quickly soloing wildly and employing an effect that transforms his instrument into an airy, eerie reed/synthesizer hybrid.  Summers lays down a framework of echoing chords at random intervals to compliment Fripp’s emotive explosions.  The slower, beatless “Girl On A Swing” follows, as this time Fripp sticks with the same guitar effect in his solo lines and Summers deploys a sad, sweet progression of chords drifting between the major and minor.

“The Truth Of Skies” is a dark mélange of malleted crash cymbals, Fripp’s electronic twitter, disjointed pulses of darkly lurking synthesizers, and Summers’ brilliant, simultaneously stinging and chiming chords.  As with most of Masked, “Skies” is a mood piece that fascinates the listener even more as he begins to pick apart the song’s components.  “Lakeland/Aquarelle” accomplishes the same task, but excludes the darkness.  It’s bright and beautiful, with multiple, overdubbed, simplistic noodlings and Fripp’s treated guitar singing an angelic melody.

So there you are guys and gals!  Just when you think your partner may not be paying attention to your daily babble, you may be surprised by a gift from them which strikes true with how they perceive you to be.  That’s how it all went down with me and I Advance Masked.  If you’re assembling a gift list for that special someone, don’t forget to include forgotten classics such as this record, because sometimes the lesser known relics mean a whole lot more than those multi-platinum juggernauts from days gone by.