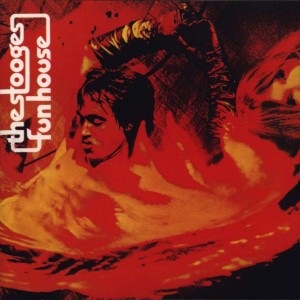 Vinyl is making a comeback, or so “they” say.  One thing’s for sure, Rhino Records is gambling that it is by reissuing a ton of classic albums from the Elektra Records catalog on heavy duty, 180-gram vinyl.  Those of us that haven’t yet dispensed with our turntables or “upgraded” to digital versions of our voluminous record collections can take advantage of this gamble by acquiring these high quality reissues to fill holes in our collections in the format of preference.  One killer re-release that I’ve been enjoying lately is the second record from The Stooges, Fun House.  Originally released in 1970, Fun House shows Iggy Pop and company trying to capture their unruly live shows in a studio setting.  They succeeded in spades and Rhino’s splendid release, complete with gatefold cover, succeeds in showing why this is one record that, while selling poorly at first, went on to inspire legions of do-it-yourself upstart bands across the globe.

The hazy, psychedelic transparency of the 1960s was burst wide to reveal the scummy underbelly of reality by proto-punk ensembles such as The Stooges.  With Fun House, they seemed wholly unconcerned with releasing a product that could be loved by the masses and wedged into the tightening formats of AM radio.  Produced by former Kingsmen keyboardist, Don Gallucci, Pop, along with bassist Dave Alexander, guitarist Ron Asheton, his brother, drummer Scott Asheton, and tag-along saxophonist Steven MacKay, were hellbent on exhibiting the fury and honesty brewing in the basements and on the stages of post-Summer of Love America.  Screw politics!  How they lived was all the politics they cared about.

Iggy Pop’s anything goes attitude in front of audiences is a difficult animal to ensnare by someone twiddling knobs at a console and attempting to capture sound for posterity.  Whatever the inspiration Pop felt when performing for this tiny crowd, he let loose with some of the most visceral emotion ever committed to tape.  One can only imagine Gallucci hoping he was still going to get paid for his work on these sessions.  Obviously there was some sort of kinship felt by Gallucci towards The Stooges, perhaps due to The Kingsmen’s own garage rock origins.

Evidence of the reined chaos can be found on Pop’s opening whoops on nearly every of Fun House’s songs.  “Loose,” for example, leads with such a call to arms before the band busts into a heavy, heavy groove and an extremely distorted guitar attack.  Pop’s snarls, pushing the meters to red, do not dominate, but rather balance his more conventional singing voice.  Not so much with “T.V. Eye,” however.  The scream that Pop unleashes at the song’s opening certainly buried the board’s needles.  While the rhythm section lays out their bass-dominated path to conquest, Pop sounds as if he’s being tortured in a corner of the room.  The screams are later used to accent the band’s phrases when they bring it down low.

Proof of Pop’s concerns for the gospel of the street is found on side one’s closer, “Dirt.”  This is a slower number with a meaty bass line and Ron Asheton’s buzzing and menacing guitar permeating the mix.  Iggy croons lines such as “Do you feel it when you cut me?” and “I’m hurt, but I don’t care” in what sounds to be some sort of sado-masochistic love ritual.  These lyrics can be taken on many levels, figurative or symbolic, but can only be delivered by someone familiar with the grimy, unlit dungeons of what passed for Detroit housing if it’s intended to ring with any truth.

Side two kicks off with another yelp from Iggy on the cut, “1970.”  He’s later snarling that he feels alright when “out of my mind on Saturday night”, but we have to have some serious doubts about that.  The group seems oblivious to what Pop’s professing as Ron delivers a blistering solo above a quick tempo rhythm.  MacKay drops in to drop some wailing sax for Iggy to scream over and the whole thing threatens to fall apart into free jazz.  Rather than flirt with disintegration, the band just gives into it on the record’s closer, “L.A. Blues.”  It’s hard to think of this song as a song, actually.  It’s really more of an excuse for the combo to deliver some fucked up noises and pass them off as intentional composition.  Think five guys soloing at once with each one attempting to outdo one another in terms of obnoxiousness and you’ll get their drift.  Zeitgeist?  I dunno, man.  That would be a kind way of describing it.  I think the “song” is really “all about” some dudes who are getting more and more curious about heroin and think that their rock and roll lifestyle allows them to do any damn thing they please.  In other words, it’s an art form, but not one that you’d ever have learned about in a classroom and one which inspired untold numbers of musicians to let their freak flags fly, much more so than any “psychedelic” rock band’s “art” ever could.

I thank Rhino for resurrecting Fun House and bringing it to me in a way that is very reverent.  It’s shocking to think that this was put out for the world to gnaw on over 40 years ago.  At the time of its release, it must have left a large number of people dumbfounded and frightened.  “What was happening to the youth of America?”  They were about to embrace an art form so groundbreaking that it didn’t even have a name (punk rock) yet.  They were learning that freedom of expression was just as valid when music was the method of delivery.  And they were secretly crowning The Stooges as the new rock royalty, all because the band didn’t care to care what you thought about them.