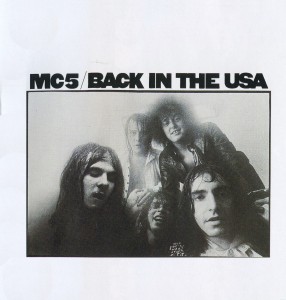 Listening to the music on MC5’s sophomore release, Back In The USA, without the assistance of historical perspective, it’s hard to tell what the fuss was all about.  But if Sherman sets the Wayback Machine to 1970, and we’re able to listen without knowing the impact that the Detroit quintet would have on the rock music to follow, we might be shocked at the group’s advocacy of “dope, guns, and fucking in the street”.  Their politics were at least as revolutionary as their music.

Flash forward 40 years later, and, despite a proliferation of controlled substances and firearms, we’re not exactly witnessing couples doing the nasty all down the block.  MC5’s crystal ball didn’t really give them any insight into the social structure of America in the future, but it did allow them to key in on changes to musical trends.  Faster, louder, more aggressive…these are the hallmarks of punk rock, which existed only as a twinkle in Joey Ramone’s eye at this point.  The problem is that MC5 were way ahead of their time.

Famously booted from Elektra Records for running an ad in underground newspapers stating “Fuck Hudson’s” (Hudson’s = The Detroit area department store chain that refused to carry MC5’s debut due to its opening war cry, “Kick out the jams, motherfuckers!”), MC5 had now moved on to Atlantic Records and were paired with an unknown producer trying to make a name for himself, Jon Landau.  Landau had not yet worked with Bruce Springsteen and was trying to figure out how to get the hottest equalization that he could get for MC5’s sound.  Atlantic and Landau must have figured that this was a record that they could experiment with and they succeeded in nearly eliminating the bottom end.  While the listener can easily pick up on Rob Tyner’s excellent voice, and the shredding guitars of Fred “Sonic” Smith and Wayne Kramer, the nuances of the superb rhythm section’s grooves (courtesy of drummer Dennis Thompson and bassist Michael Davis) are buried deep down in the mix.  So the record is a high energy thrill ride, but there ain’t much meat on the bones.

Some MC5 fans prefer the group’s debut, Kick Out The Jams, but I and many others love Back In The USA more.  Landau, despite his intention of putting the high register into overdrive, tried to capture the live sound of MC5, and seeing them live was probably the best way to experience their music.  With nine original songs and two odd covers (Little Richard’s “Tutti-Frutti” and Chuck Berry’s “Back In The USA”), it’s still a painfully short record, clocking in at less than half an hour.  MC5 make up for the brevity with intensity, however.  Take, for example, the record’s non-charting single, “Tonight,” and its celebration of seeing a favorite band in concert. Tyner gives an impressive, R&B-influenced delivery, both forceful and sexy, while the duo of Smith and Kramer deliver simultaneous guitar solos with a subtlety of harmony.  This song could have come from a mod group in England, such as The Who, but feels more authentic because it’s coming from guys that grew up in the immediate surroundings of the Motown sound.

Even the record’s ballad, “Let Me Try,” has a considerable soul influence.  Tyner’s flexibility at the microphone really shines through and the band’s doo-wop backing harmonies are outstanding.  Of course Tyner is singing about breaking down the defenses of his romantic interest in this smoldering seducer, but that’s beside the point.  The political concerns pop up elsewhere, as if to present a complete contrast to the band’s libidinous side.  “The American Ruse” condemns the disposable elements of culture becoming more commonplace in the US of A.  It’s a straight-up rocker with a fantastic performance by Thompson and a blistering solo from Smith.

“The Human Being Lawnmower” is a bizarre number which changes gears several times over its less-than 2 ½ minutes.  The musical ideas would have served as fodder for an entire rock opera by modern day punks such as Green Day.  The lyrics are a comment on the Vietnam War and selective service, with the guitars’ staccato sound effect and Tyner’s “chop chop chop chop chop chop chop chop” illustrating the ease and brutality with which lives are cut down.  The song adds dimension to an already complex combination of musicians, their groupies, and their radical manager.

It’s hard to take MC5’s choice of ending their record with Chuck Berry’s “Back In The USA” as anything but a sarcastic slam at their country, following “Lawnmower” as it does.  That being said, the band truly cranks it out and actually remains rather faithful to Berry’s version.  Kramer undeniably pays tribute to the legend while he trades solos with Smith.  But you can’t help feeling that Tyner has a sneer on his face while belting out the words.

A band as hot as MC5 can only burn brightly for so long.  After one more studio release, the original combo went their separate ways.  The group’s music, however, left an impact on other artists that followed in their wake which is not immediately recognized from a cursory listen to Back In The USA.  Think about how easily politics mesh with pop music today, or how acceptable it is to be a tattooed punker tearing it up on the stage, and you’ll understand the furrow first plowed by MC5.  This should give us some comfort that even five young musicians from the motor city were able to tap into something that had not yet been invented.  Maybe anyone can channel something from beyond their dimensions!  I don’t know that they were using a doorway through time or anything so sci-fi, but I will start to wonder if I ever see people freely bumping uglies in the middle of the highway.