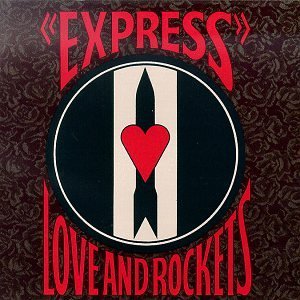 One release that easily makes my Top Ten list of records released throughout the 1980s is the sophomore collection from Love and Rockets, Express.  Originally seeing the light of day in 1986, it showed a band branching out further from their roots in the successful gloom experiment, Bauhaus, to exhibit an over-the-top glam/psychedelic stew of buzzing guitars, Eastern spiritualism, somnambulistic voices, and cascading beats.  The density of their sonic collage had little comparison to other acts of the time and still holds up 25 years later with little evidence of sounding dated.

With no sign of vocalist Peter Murphy returning to the fold for a full-fledged Bauhaus reunion, the quartet’s remaining members, guitarist Daniel Ash, bassist David J, and David’s brother, drummer Kevin Haskins continued to forge a sound that left Bauhaus’ Halloween trappings in the dust.  While not nearly as expressive as Murphy, Daniel and David were solid enough at the microphone to split lead vocal chores and complement one another on harmonies.  And while Love And Rockets’ 1985 debut, Seventh Dream Of Teenage Heaven, was certainly a departure from the artists’ work in Bauhaus (cheerier and with more layering in the studio), Express made them sound like a different band altogether.

Daniel Ash sets his guitar aside once or twice on each album to play a little saxophone and that’s how he chooses to kick things off on Express.  The sax is just the first level to “It Could Be Sunshine” as sound after sound is piled up while the song stomps through its opening.  Before an increase in tempo, we’re treated to Ash’s fizzling guitar, Haskins steady bass drum, electronic percussion, marimba, David J’s simple bass line and, eventually, his voice.  The song, after an a capella mini-choir of harmony voices telling us to “see the outside, see the inside too”, then explodes.  Haskins’ boom-boom-crack anchors a truly fiery and distorted performance from Ash and a noodling, penetrating delivery from David J, who’s now handed the mic over to Ash.

If that weren’t enough to take your breath away, “Kundalini Express” lets Haskins tear loose on some tasty set-up fills to the sound of a train whistle announcing our impending departure.  Kundalini is a coiled body energy, which, when released through yoga or traumatic experience, triggers profound psychic revelation.  In likening this awareness to a passenger train tearing down the tracks, the band is actually delivering a message that music, when successful, is both a physical and mental experience—thought, sensation, the world around us, and higher consciousness are all one on not just this song, but the entire album.  Daniel and David exchange half-verses of the song when not amusingly “woo-wooing” their own train noises.

The song “All In My Mind” is presented in two very different versions.  The first is a happy pop take with Ash’s electric guitars used as background textures and in a bristling counter-melody, while the acoustic parts are kept to a chording strum in the song’s body and delicate pick-work on the pre-chorus.  Haskins drums are up front in the mix with a very danceable rhythm maintained throughout.  The “acoustic version” means Ash is playing acoustic guitar, but the electric noises used are nearly as complex as those on the first version.  The acoustic version is far superior, however, as it chokes sadness from the words, has a better vocal arrangement, slows the tempo way down, employs sparse and echoing percussion, and ultimately delivers the chills you’ll never get from an upbeat (alternative) pop hit.

In the world of offbeat cover tunes, Love And Rockets’ take on The Temptations’ 1970 state of the union address, “Ball Of Confusion,” has to rank right up there for both oddness and greatness.  Daniel and David sing the lead in tandem, while David’s grooving bassline propels the piece.  Daniel keeps his guitar to a stinging tone, whether scorching underneath the chorus or laying out sci-fi sound effects.  His “tick tock” noise on the outro is especially clever.  “Love Me,” by contrast, is a slow and sulking number sung in whispery tones by David as his bass pulses through our brains.  His cryptic lyrics, intoning “I’m only interested in pure light, I’m only interested in what is right, I’m only working so hard” have him singing in full voice just before Ash unleashes a brickbat of tremolo arm.

The record closes with what may be Love And Rockets’ masterpiece, “An American Dream.”  It’s a song with several sections that flow effortlessly into one another—an acoustic guitar, sax and keyboard base underneath more whispered vocals give way to Haskins’ thundering kit, David’s sliding fretless bass and Daniel’s full, British-inflected voice.  This section culminates with a spectacular a capella delivery of the phrase “feeling so high and low, it’s the American Dream” before dropping back to the same timbre and instrumentation that began the piece.  It’s one of those songs that you could leave on “repeat” all day long and never grow tired of it.

Sadly, following record label rip-offs and hassles, devastating, equipment-destroying fires, and a lack of consistent success, Love And Rockets is no more.  But I’ll always remember them as a band that challenged themselves to create music on each of their albums that bears little similarity to what came before it.  Look to the works of your favorite artists and see if you can identify a standard, characteristic sound.  If so, take them off the list.  Of those artists remaining– the ones that changed things up over the years–remove the ones that had “failed experiments.”  You’re left with a very short list, but hopefully, like on my list, Love And Rockets figures prominently.  If not, get busy buying, and start with their best—Express.  It’s the perfect entry point to a catalogue that’ll still hold up 25 years from today.
-Mark Polzin

One thought on “Love And Rockets – Express”