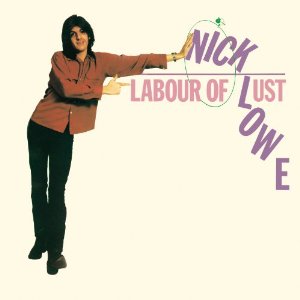 A couple of years ago, when I tried to track down Nick Lowe’s second solo release, Labour Of Lust, I was shocked to find that it was not available on CD in the U.S.  Not to be discouraged, I did manage to find a reasonably priced used vinyl copy.  If I had just chilled out until now, I would have been able to nab Yep Roc Records’ CD reissue, which became available on March 15, 2011.  In celebration of Yep Roc addressing this 20-year long injustice, I gave my vinyl version a spin and found Labour Of Lust to be just as thrilling as it was when I first heard it back in 1979.

Nick Lowe’s name is unfortunately not known to the masses, but odds are that his work has touched the ears of music fans in one way or another.  His first brush with fame came while he was the bass player and principle songwriter for the excellent U.K. pub-rock combo, Brinsley Schwarz.  Pub rock was a factor in the equation pointing to new wave and punk’s assent in the mid-70’s, with its reliance on shorter, catchier tunes and stripped-down arrangements that balanced out the arena-shattering excesses of multi-platinum selling giants of the day.  Lowe formed Rockpile in 1975 with guitarists Dave Edmunds and Billy Bremner and drummer Terry Williams.  Although Rockpile only issued one LP under that moniker, they were actually the group playing behind Lowe on Labour Of Lust.  Throughout this period, Lowe served as the in-house producer for Stiff Records and oversaw the completion of, among others, the first five albums by Elvis Costello and the debut record by The Damned.  Over the course of the decades to follow, Lowe worked as producer, songwriter, and support musician to artists as varied as Johnny Cash, John Hiatt, The Fabulous Thunderbirds and Pretenders.  His “What’s So Funny About Peace, Love, and Understanding,” first made famous by Costello, was covered by Curtis Stigers on the soundtrack to the movie The Bodyguard.  The sales of that album made Lowe a millionaire through songwriting royalties.  Of course, Lowe continued to release albums under his own name all along, all of which exhibit his superb talent at penning lyrics.  Lately he’d found a home with Yep Roc Records, which released his newest recordings and has steadily acquired rights to reissue Lowe’s long missing back catalog.

So you now you know a bit more about the man, but why did I find it so important to own Labour Of Lust despite its unavailability?  A drop of the needle on Side One reveals one of the main reasons, Nick’s only major U.S. hit, “Cruel To Be Kind,” co-written by Ian Gomm.  I mean, seriously, if you’re my age or older (I was 12 in 1979, do the math) you’ve heard this song many, many, many times and it never gets old.  What do you like in your pop music?  Sturdy, driving, and danceable rhythm, great chord changes, sweet lead vocals, excellent, layered background vocal harmonies, an early-Beatlesque guitar solo, succinctness, memorable lyrics –it’s all there!  Now, if “Cruel” were the only highlight of Labour Of Lust, I wouldn’t have been so manic about getting the record into my collection.  It’s a stellar track, that’s undeniable, but it’s only one of several outstanding moments on the LP.

Skipping to the last cut on Side One, “Skin Deep” comes damn close to the greatness of “Cruel.”  I’m reminded of why I like Lowe’s bass parts so much.  They’re always prominent in the mix, but are never overbearing and always push the tune forward like a good bass line should.  The high harmony background vocals and the great acoustic guitar strum above Williams’ solid drums add to Lowe’s lyrical thoughts on the true meaning of love.  “Always belly to belly, but never eye to eye,” nuff said, Nick!  Still he tacks on “a moment to treasure is just a matter of time.”  Lines like that don’t flow from everybody’s pens that easily.

Flip the record to hear Nick’s take on Mickey Jupp’s “Switch Board Susan” and how much Nick likes to add a good measure of rockabilly to his pop.  “I’m a long distance romancer, I keep trying ‘til I get an answer” tells you all you need to know about the hound dog wagging this tale.  Edmunds and Bremner really outdo themselves here with bright, interlocking lead and rhythm lines.  This cut’s followed by Lowe’s “Dose Of You” and more remarkable guitar.  Edmunds’ solo material is usually stamped with a signature, echo chamber guitar bluster, but here he’s using a number of effects (and lack of) that never detract from Lowe’s addictive vocals.

“Without Love” is like some long-lost Byrds/Flying Burritos track.  All it lacks is some pedal steel to transform it into So-Cal cosmic country rock.  Williams gets busy with a shuffling clatter on “Born Fighter” and Lowe’s bass pulse stays right with him.  Dig the harmonica and Edmunds twang-abilly solo when you’re not marveling at how much Lowe’s voice kicks ass on the chorus!

OK, that does it!  I’m off to track down some more Nick Lowe music to fill some holes in my near-exploding record cabinet and CD rack.  You should follow suit and start by searching for a cover featuring a lanky dude with a spitting gap to his smile and a bad shock of hair on his head, getting cheesy while he pushes the record title over.  That record is Labour Of Lust, my friends, and you’ll thank me for recommending it to you.

One thought on “Nick Lowe – Labour Of Lust”