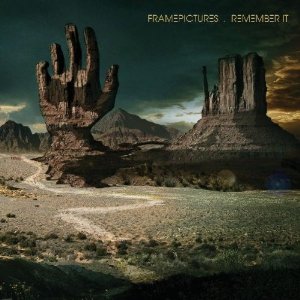 So what happened to all the prog rock reviews, Mark?  Patience, my children!  Both Classic Rock Music Blog publisher, Todd, and I are huge prog rock fans, so you’ll see more mention of releases by artists both old and new in that genre in the weeks and months to come. Getting back to the varying time signatures and virtuoso performances, we cast our light on Portugal’s Framepictures and their 2010 release, Remember It.  The name, Framepictures, has a dual origin, framing progressive rock with a style of modern day acts such as Tool, Radiohead and Porcupine Tree, while glimpsing pictures of styles by classic prog or art rock artists such as Brian Eno and Rush.  The second meaning is a nod to the album Moving Pictures, a highpoint in acceptability by the masses for prog rock.  Their name, while somewhat awkward in English, is rather accurate, on both accounts.

Framepictures’ mastermind is drummer, lyricist, producer, Artur Jorge.  It’s his guiding hand on all of these levels that’s felt over the CD’s 78 minutes.  Although a lengthy release, it’s subdivided into a mere seven tracks.  The shortest of these, at 5:35, is the title track, which features a cryptic lyric that to my ears refers to a reunion of the song’s protagonist with a lover who has passed away.  He implores her to wait for him to join her in death, forgetting all else she may have experienced in life, before the two move together to a higher plain of existence.  Vocalist Tiago Delgado delivers the message in English (as he does throughout the album) and in a voice that can sound like Smashing Pumpkins’ Billy Corgan (if Billy could actually sing) and use phrasing similar to that employed by Ozzy Osbourne.  That description doesn’t quite do Tiago justice as he’s really a very skilled singer.  This cut, as on all others, features dynamic performances by Jorge, guitarist Helder Da Silva, and keyboardist Mafalda Brogueira.  Brogueira moves adeptly from synthesizer to grand piano and back again, with talent that could easily have her delivering classical recitals if she grew tired of the whole rock and roll thing.  Da Silva, on the other hand, is absolutely brilliant.  In first hearing him, I feel as I did when introduced to Joe Satriani, Tom Morello or Slash.  He has taken guitar to a whole new level and elevated Framepictures far beyond the heights attained by other prog rock combos; he’s that good!

“Call For Me,” at over 12 and a half minutes, is stunning.  Da Silva’s variance in tones and Jorge’s “YYZ”-style fills are the one-two punch that lays me flat.  That’s not to diminish the importance of bassist Ricardo Drummond here, as he leads the band through numerous time changes and moody directions.  His constant, fast-paced delivery holds everything on course while Jorge breaks down into behind-the-beat jazz and Da Silva moves from his own jazz licks to aggressive metal in a spiraling display.  Da Silva is Alex Lifeson on steroids and caffeine simultaneously, taking time to don a smoking jacket and pull puffs from a hookah.  But check out the “give the bassist some” solo for a few measures at about nine and a half minutes in!

“Don’t Trust My Eyes” begins with a Fripp/Eno reverse and subdued guitar sound augmented eventually by Brogueira and Drummond.  This is short-lived, but used later as a touch point, as Jorge and Da Silva soon saw away at high-speed riffage.  Da Silva’s solos practically come complete with their own spotlights.  The mood here is actually set by Delgado’s voice as he pushes the limits of his phrase’s lengths.  The song closes in much the same manner as it began – spooky and somewhat sad.

The bent and distorted bass guitar leading the way for “Shadows Black And Grey” is very jarring, yet completely enthralling.  Once Drummond has our attention, however, it’s a breakneck tumble down a path with road signs railing against societal conformity.  Delgado is enmeshed in the sounds from his band mates with a squelched, over-the-hills-and-far away effect not used elsewhere.  Once Da Silva is certain that the rest of the combo has the twisted rhythm under control, he’s freed to offer up a dizzying burst of a solo that comes too quickly for human minds to register what’s just occurred.  Nine minutes fly by like mere seconds.

The CD closes with the grand, 26-minute, seven-movement “My Will To Live.”  It again contains lyrics that tell a tale similarly told by many modern day prog bands – a tragic story of separation and the fight to reunite.  The twist here is that, though the song’s protagonist stays focused on the matter that caused the separation, in order to resolve the issue, he discovers afterwards that he’s regained an understanding of why, above all, he has the strength to endure.  He’s recognized what gives him the will to live.  Yet, before he’s able to reunite with his lover, he dies.  His will to live takes on new meaning as his new struggle is now a fight to return to the world of the living.  Heady stuff, for certain, but a group has room to tell such a fable when the song lasts as long as this one does.  The band’s performance matches the epic scope, however.  Where we were previously given a peek into a darkened room, the walls have exploded to reveal a stroboscopic spectacle of exactly how well these musicians perform and perform with one another.  “My Will To Live” ranks right up there with your “Lamb Lies Down On Broadway”; your “Cygnus X-1” and “Hemispheres”; your “Tales Of Topographic Oceans” and your “Thick As A Brick.”  It’s that fucking amazing!

I have huge expectations for the future works of Framepictures.  Progrock Records has a great track record of finding the best progressive rock artists in Europe and bringing them to audiences worldwide, but they’ve suddenly upped the ante by their discovery of this band and the release of Remember It.  More, please!  And don’t leave me hanging for long!
-Mark Polzin