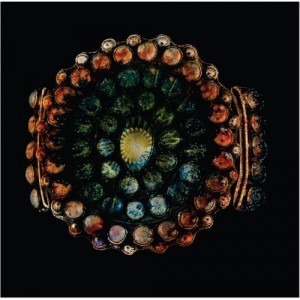 A few weeks ago, I was reading about some CDs that were about to be released overseas.  One release that really attracted my attention was by a group called Hiss Golden Messenger and album titled Country Hai East Cotton.  Aside from the odd name of both the band and their album, the description of the music in the article detailed a mash-up of genre-crossing approaches—just my cup of tea.  Country Hai wouldn’t be available until 4/5/2011 and I wasn’t too keen on paying import prices.  Luckily, there was another option.  The band had released the record in the US back in 2009 in a limited edition of 500 hand-numbered CDs.  I managed to track down a used copy, number 500 of 500, to be exact, and I’m mighty glad that I did.

Hiss Golden Messenger is mainly two guys, multi-instrumentalists Jai Lil Diamond and Scott Hirsch, who had played together in the California ambient/country outfit, Court & Spark.  They’re bolstered by a number of keyboardists, percussionists, and strings players, but HGM is essentially a duo expanding on the ideas first presented with Court & Spark.  The music is very low-key and laid-back, but dabbles in a number of pop and rock gene pools to create something in a genre all its own.  The occasional country instrumentation is used for effect, but the songs never have a country music feel.

A good example of the originality present on Country Hai is found on track 2, “Watch Out For The Cannonball.”  The vocal delivery wouldn’t be out of place on an Aztec Camera album, and the use of strings and electronic flute imitations above a driving bass and drums track might place this release in 1985 chronologically.  But there are sounds buried down in the mix that explain why HGM took nearly 3 years to finish Country Hai.  There’s a section where lesser bands would have placed a guitar solo that HGM employs some sort of vacuum-cleaner-hung-up-on-a-loose-corner-of-carpet noise.  The pop hit nature of the song is continually implied by the bass and drums through this section.  When Diamond returns to his Gerry Rafferty in the root cellar vocals, nothing has been unhinged.  Yet only the truly observant will have noticed the deviations the song had just taken.  It’s here where you realize that your enjoyment of this CD will be greatly enhanced by a good set of headphones.

“John Has Gone To The Light” follows and begins as something akin to dub reggae, but the horns and pedal steel guitar on the chorus turn a corner to something reminiscent of a lost George Harrison track, circa “Crackerbox Palace.”  The majority of the piece, unleashing Jerry Garcia-style clipped pedal effects above Lee “Scratch” Perry minimalist notes from a variety of instruments, that are dropped in and pulled back out nearly as quickly, takes the song down a previously uncharted path.  This is characteristic of the whole record.  It sounds like something that you’ve heard before, but when you try to place it exactly, you’ll come up short.  “O Nathaniel” shuffles along like another Englishman’s take on a Southern California group from the mid-70s, but all of the ringing electric piano, scratching percussion devices, simple synthesizer lines, and knocked-flat electric guitar fills place the tune on a continent and in a decade beyond definition.

“Isobel” begins with sparse harmonium, Diamond’s voice, and strummed electric guitar chords.  Slowly, the bass guitar, drums, and strings are added to the mix on this beautiful ballad.  But the truly stunning moment comes on “Resurrection Blues.”  Again, I’m unable to make an exact comparison to anything previously recorded—which is exactly why this record is so special.  A busier bass line might bring the tune closer to reggae, what with its woozy, muted horn section and medicated, multi-tracked call and response voices, but Diamond and Hirsch have a different plan.  The lyrics are damn clever as well, wearily telling a tale of a savior wishing that he could just die instead of continually being brought back to life.  I couldn’t tell you what the backwards voices near the song’s close are imparting to my subconscious, but they do serve to enhance the downtrodden lamentations of the protagonist.

I don’t know how you’ll choose to acquire Country Hai East Cotton, whether you test if I did actually grab the last copy of the U.S. version or you’ll wait for the U.K. reissue, but I do know that this is a modern day classic that you’ll want to hear for yourself.  I’m hoping that the reissue has some legs and that Hiss Golden Messenger stays fired up to produce more material in the near future.  It’s rare that a newer group packs as many surprises into their albums as HGM does, but I’m certain that they’ve only begun to catch us off guard.