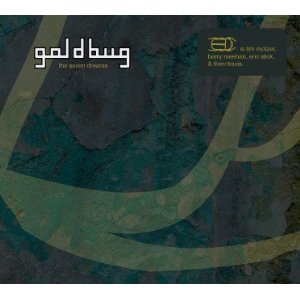 I used to listen to a lot more jazz than I do these days.  Don’t get me wrong; I still enjoy jazz quite a bit.  The problem is that jazz started to feel a bit formulaic to me.  I know that jazz is all about the improvisation, but I felt that newer jazz musicians were choosing to frame their expression the same way that so many artists before them had already framed theirs.  Paying homage to your influences is one thing, but come on!  Are you telling me that everything that could possibly be conveyed through jazz had already been recorded?  So I set my jazz to the side for a little while in hopes that something new would come along to rekindle my interest.  Enter: Goldbug!

The Seven Dreams plays out like a unified song cycle or a multi-movement piece of creepy soundtrack experiments.  The setting of the stage begins with “Shadow Memory,” a 59-second mélange of ghostly keyboard noodlings and sci-fi sound effects which wouldn’t have been out of place as the music bed beneath a scene from The Land Of The Lost TV show as the Marshall family stare in amazement at the wonders of the insides of a pylon or the ruins of the Sleestak temple.  Suddenly, with a step on a hi-hat pedal, Slick and Meehan are busily into “The Departure” and laying down the funk.  Motzer is offering random processed guitar chords, but the song is really all about the rhythm section.  “The Departure” abruptly ends to the sound of deliberate typing on an electric typewriter and then it bleeds directly into “Unraveling.”  Motzer has now returned to the sound effects, with more creaking, deep space bleeping, and rustling, skittering creature noise.  This then gives way to the 11-minute “Scratching The Third Eye” as Slick, beneath darkly descending tones from Meehan and Motzer creates a rhythm that skirts circles around the song’s meter.  Motzer on occasion plays brief, dreamlike solos before alien devices do battle with Meehan’s steadily pulsing tones.  A devastatingly slow pattern of piano and bass tones eventually succumbs to Motzer’s spacey, robotic demons.

Travis doesn’t appear until the 5th track, “Elevation,” as his tenor sax attempts to slice through the rising cacophony of reversed pianos and guitars.  His echoing and fading triumph is soon lost beneath a distant drumbeat/heartbeat and lapping waves.  “The Past Is Still Present” then slithers in like the measures where The Grateful Dead’s Rhythm Devils hand their batons over to a Space Jam.  Slick’s toms are the basis for the song’s Arabic feel, but he single-handedly shatters that mood as he seeks new areas of his kit midway through the piece’s 11 minutes.  Motzer’s approach on guitar goes from expected jazz soloing to very un-jazz, single note repetition in a set-up to tortured solo lines from Travis.  Meehan’s powerful notes are ever-reaching and straining, but intentionally fall shy of a natural resolution to the phrases.

The disc’s final track is “Persistence Of A Memory,” and it feels more like a tension fraught cool down than a last hurrah.  Travis has now switched to flute and his fluttering lines meld in echoing contrast with Slick’s syncopation.  For more than five minutes we’re half expecting there to be a build up to a mighty, thunderous power chord ending.  But the song, and the album, drifts harmlessly by.  The threat of danger never materializes, and instead fades away to worry us another day.

Tim Motzer has the resources that he needs to exhibit recordings of his various musical deviations whenever he chooses.  Goldbug, being more of a studio project which formed during the splintered downtime between each of the artist’s main gigs, may or may not release more material in the years to come.  But I’m hoping that the quartet do have a similar opportunity to merge their leftfield jazz sensibilities with one another’s once again.  The Seven Dreams brings very welcome dimensions to jazz and should lure others who, like me, had grown tired of hearing the same ol’same ol’.