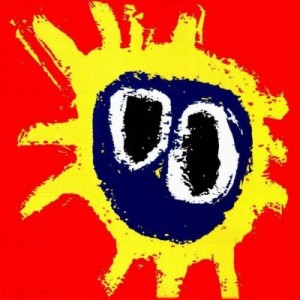 From the “Holy cats!  Has it really been that long?” files, we take a look back 20 years to the third record from Glasgow’s rock and roll chameleons, Primal Scream – Screamadelica.  I was recently made aware that these two decades since its original release had slipped past me when I saw an advertisement for the 20th anniversary box set collection, which is now available for purchase.  Now, I like to pick up versions of releases with all the bonus tracks and whatnot whenever I can, but this celebration, like that enjoyed by the band following Screamadelica’s release seems to get a bit extreme.  We can get either the CD version of the set or the double heavyweight vinyl version (with gatefold cover, natch!) if we choose.  Throw in a “Making Of” DVD, a 50-page book, a T-shirt, art cards and a DJ slipmat and they can charge umpteen zillion dollars for this celebration, so I’ll just stick with the original CD from 1991.  Let’s just talk about what made it so cool the first time around.

Some of you rock dogs may not be familiar with this group, so I’ll lay the groundwork for you.  The late ’80s and early ’90s was seeing a resurgence of dance music which differed from what we heard in the disco era of the ‘70s by the type of drugs used to fuel the dancers.  In the ’70s, cocaine was the weapon of choice.  In the ’80s and ’90s it was more about ecstasy and LSD.  The latter even lent itself to the name of this music in “Acid House.”  Mind you, I’m not advocating anything here, just giving a history lesson using actual facts.  Primal Scream was a band faltering for a sound starting in 1986, first with a sort of jangle pop thing and then on to a more Stonesy vibe.  Neither approach took off all that well for them.  An old friend of singer Bobby Gillespie, Creation Records’ owner Alan McGee, introduced the band to the acid house scene.  While Gillespie was more of a punker or rocker at heart, he soon embraced the rave influence and fully immersed himself in the culture.  I’d imagine the free flow of all chemicals known to man did not discourage him in any way, but more on that later.

For those of you now mousing for your back button to retreat to your “disco sucks” fortresses, I ask you to hear me out.  Some of your favorite bands have had flirtations with the dreaded disco music.  You’ll hear ELO’s “Don’t Bring Me Down,” The Rolling Stones’ “Miss You,” Rod Stewart’s “Da Ya Think I’m Sexy” and KISS’ “I Was Made For Loving You,” and you won’t turn your radio to another station.  So it was with Primal Scream.  This was a scene that they wanted to be part of and, yes, they moved beyond it to more meat and potatoes rock afterwards.  Screamadelica consists of mostly dance music, and damn good dance music at that!  Most importantly, it’s just good music, genre be damned!

Screamadelica contains four huge U.K. hit singles and you may have stumbled across these songs here and there.  It was never a giant record in the States, outside of the college and dance music fields.  One of the hits was the song “Higher Than The Sun,” which creeps into your brain as more of a chill-out exercise than a booty shaker.  This has everything to do with the track’s producers, U.K. duo The Orb.  The Orb’s music roughly fits into the broad genre of dance music, but it’s mostly something you’d twirl your dimming glow-stick to in the rave’s cool down tent.  That being said, I’m a huge fan of The Orb and their mixes are truly out of this world.  They treated Primal Scream well on the one cut they were asked to produce.

Seven of Screamadelica’s 11 tracks are produced by well-respected U.K. DJ Andrew Weatherall.  Weatherall converted basic band performances through sampling and effects into true works of sonic art.  One of the more intriguing pieces is “Inner Flight,” which is scarcely more than a simple keyboard pattern bolstered by slow, slushy, heartbeat-through-a-stethoscope drum rhythms and a very dreamy, soulful, wordless singer.  Again, not a rump shaker, but also not something we were hearing elsewhere at the time.
Weatherall also demonstrated his talent on one of Primal Scream’s biggest hits, “Loaded”.  The combination of Gillespie singing Robert Johnson’s “Terraplane Blues,” a drum sample from a bootlegged version of Edie Brickell’s “What I Am” and some of Peter Fonda’s spoken dialog from the movie The Wild Angels (“We want to be free to do what we want to do.  And we want to get loaded.  And we want to have a good time.  And that’s what we’re gonna do.”) is pretty freaking inventive.  The band seems to have lifted their piano and bass parts from “Sympathy For The Devil” while slowing them down, but they managed to throw in some tasty slide guitar and a “Fanfare For The Common Man” synth figure to also spice things up.

Weatherall strikes again on the slow-paced “I’m Comin’ Down”, with raggedy sax punctuating Gillespie’s “I wouldn’t be heading home if the sun weren’t rising right now” approach.  This song again is only tangentially dance music, in that there are sampled beats.  But only a character from “Night Of The Living Dead” could attempt to frug to this one.  Another great Weatherall moment closes the disc with “Shine Like Stars.”  I guess I like the slower songs best on Screamadelica, because “Stars” is roughly the same tempo as “Comin’ Down.”  “Stars” uses an accordion and distorted samples of what sounds like waves crashing on a beach to drive home its point.  The wiggy fade out wraps the whole collection up perfectly.

As if to emphasize that Primal Scream is actually a rock band, they employed former Stones producer Jimmy Miller on two cuts, but these are not exactly my favorite moments on the record.  Miller would have provided stronger tracks if he had worked on straight up rock n roll instead of Scream’s experiments in homage.

So there you have it!  Primal Scream went on to become a household name in the U.K. and the group got caught up in all the usual excesses that come with such fame.  Stories tell that the entire band was addicted to heroin by the time they’d finished promoting Screamadelica.  Luckily they all cleaned up and survived the ordeal to go on to release other wildly creative records—some in a rock n roll vein, others more disturbing and abrasively danceable.  Screamadelica is a document of a weird time in musical and cultural history where the underground tried hard to get up and over.  It’s a record that all of you should at least give a listen to if you decide not to own it.  Whether you hop on the bandwagon and help the record label cash in on the nostalgia is up to you.  I’ll just stick with my memories of that time and my copy of the original CD.  I only needed to pay once and my memories don’t cost me one cent more.

One thought on “Primal Scream – Screamadelica”