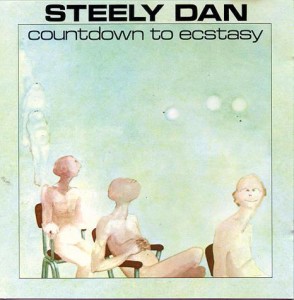 Today, I listened to an old favorite record, Steely Dan‘s 1973 release, Countdown To Ecstasy, and I heard it as if for the first time. And I’ve heard it a lot. This record ran through my head during college, when my friend Craig and I would spin it on long weekend nights. Craig loved “Razor Boy,” and would glide across the room singing the chorus as if he – and the song – was too cool for reproach. Probably so.

I don’t often take the time, but I plugged in headphones and listened to Countdown in its entirety and came away feeling that this was not only Steely Dan’s masterpiece, but one of the greatest “rock” records ever. The arrangements and lyrics are remarkable, but it’s the individual playing that stands out. Before Steely Dan became a sole vehicle for Donald Fagen and Walter Becker‘s muse, the Dan were a real band. Remember Jim Hodder? He was the drummer on the first two Steely Dan albums. Hodder’s playing is often overlooked, with the likes of Jeff Porcaro, Bernard Purdie and Steve Gadd getting all the props. Give another listen to Countdown and tell me Hodder isn’t the equal of anyone. Check out the beginning of “Bodhisattva,” with Hodder working the snare drum and hi-hat to crystalline perfection, or the song’s outro as he rages across the kit like Keith Moon channeling Elvin Jones. Temper it with the laid-back, sly groove of “Your Gold Teeth.”

Jeff Baxter‘s pedal steel guitar on “Razor Boy”is bubbly and at times teeters with the cosmos, while the country-rock stylings on “Pearl Of The Quarter” recall The Byrds of years earlier, when Clarence White was blowing minds by playing pedal steel licks on his Fender Telecaster via the Parsons/White B-Bender.

Denny Dias unleashes a wildebeest of a solo on “Bodhisattva,” one that runs across the very time of the tune and threatens to run off the tracks entirely before Dias throws a lasso over the beast and finally reigns it in. Bad ass!

The oblique guitar solo on the post-apocalyptic “King Of The World” is strange and sublime, unlike anything in the Dan catalog. Dias exacts a miniature composition through an inverted sonic protractor, tracing angles and shapes that don’t sound quite right but somehow keep the zig-zag signature on the page.

There’s nothing like a set of headphones to open the ears.

One thought on “Steely Dan – Countdown To Ecstasy: A Reappraisal”